Pilot, it could happen to you.

I was at a monthly meeting of an aviation organization I'm a part of. The Safety Officer was giving the usual safety brief. The focus was on an incident, detailed in a monthly safety bulletin, that had happened elsewhere in which a pilot apparently ran the aircraft off of the runway. The title of the article outlining the incident was "It Could Happen To You."

"Don't go around thinking this couldn't happen to you," the Safety Officer said.

I elbowed my friend, and sighed. "I actually fully expect something like that to happen to me."

I don't know if I'm the only one, but I don't actually think "that won't happen to me" as I go through life. Rather, I wait for the shoe to drop.

If you've ever sat with a bunch of pilots, you'll hear their horror stories. I'm pretty low hour, but I've got a couple of oh-my-goshes (Dickinson and Carrington), two mechanical issues, and an oops under the belt already. Maybe that's why I'm low hour.

My friend just rolled his eyes at my comment.

One thing you learn about while studying for your private pilot's license is the Hazardous Attitudes. AOPA has made a handy little chart: 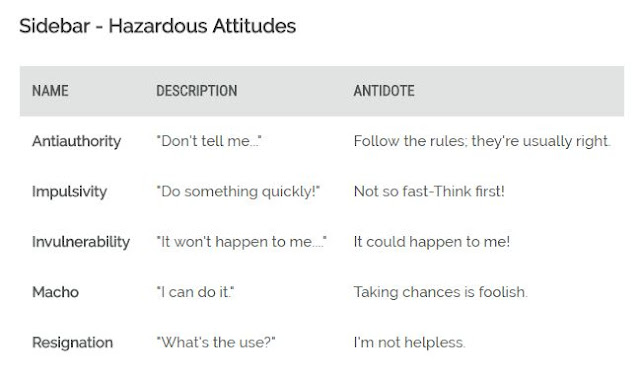 The hazardous attitude that I often hear bleeding into safety briefings is a mix of carelessness with "that won't happen to me", hence the common tactic of showing an accident (we're all rubberneckers at heart), dissecting it, and using it to show pilots that it could happen to them.

Saucer-eyed, I always agree, and give respect to the four forces of flight. You are preaching to the choir on these topics, because each time I get into the airplane, I expect it to happen to me. I'm a checklist-obsessive by-the-book overly cautious pilot, because I want to stave off the seeming inevitable.

I've flown with people who are super casual at the controls, but I always feel like I'm at death's door. "Don't talk to me. I'm flying. I'm scanning the sky. I'm checking my altitude. I'm working the rudder. I'm adjusting the trim. I'm monitoring what's keeping me from death, so don't talk to me. STERILE COCKPIT!"

Of course, some of the safety brief is used to talk about avoiding hangar rash (airplanes getting dinged by pushing them into doors and walls), which is a very expensive disease.

At the end of the meeting, as one of the airplanes was being pushed back into the hangar, I began walking the wing (i.e. following the wing in to be sure it didn't get pushed into the door frame). The guys pushing and manning the tow bar decided to adjust the angle, so they pulled it forward to try again. I waited where I stopped, intending to pick up the wing again as they came towards me.

Luckily for allegedly inept females everywhere, some other man started walking the wing as they resumed pushing; he walked right into me so that I had to step back because, as you know, I certainly couldn't have been capable of knowing how to walk the wing and needed a man to do it "right." I contemplated telling the man that I was handling the task, but it was clear he'd taken over and sometimes I get tired of caring enough to push back in these situations.

A month ago I'd given a brutally blunt and direct presentation at the  organization's state conference, outlining why volunteer members leave organizations. Here I was, with yet another illustrative point: pushing yourself into another's job and pushing them out for no good reason but possibly Hazardous Attitudes #4, Macho, and its subsection, #4a Woman, Stay In Your Lane Which Is Not By The Airplane.

For our next safety brief, perhaps it'll be a photo of a man bending over in a grimace.

Pilot, it could happen to you.
Labels: aviation