Going to the gym, and more happily, leaving it.

There was a tree or two, the hot sun. Some weeds.

My friend and I sat in the truck in the parking lot of the gym. "We only said we should go to the gym," I said. "Technically, we are at the gym."

I hate going to the gym.

I'm not Joe Athlete, and never have been.

Still, as far as the gym goes, I've gone pretty regularly, three times a week, for several years. You wouldn't know it from looking at me of course. I don't go to get a bikini body (oh my gosh, no, I would never wear one). I don't go so I can look hot in clothes. I don't go so I can post my workout stats and photos on social media to let the world know I mastered my body and have achieved health idolatry, disguising it as faux encouragement for others instead of bragging. At this point, I go to maintain bone density and basic muscle tone, enough cardio fitness so I'm not that person out of breath after a flight of stairs, and enough flexibility so I don't end up walking with a stilted shuffle when I get older. That's about it at this point.

I mean, there's nothing like choking through an interval sprint on the treadmill, shins screaming, knees quaking, gasping for breath, ruing everything I've ever eaten my entire life only to see an Arby's commercial come across the screen. I'm barely not a vegetarian as it is, so seeing a big close-up stack of meat-glued meat with a deep voice saying they have the meats makes me want to vomit.

Someone should make a video montage--about 30 minutes worth--of the chase and fight scenes from movies like "Underworld" or "Resident Evil" or something similar. It's easier to run to that instead of commercials about tampons, pizza, Humira, and some preacher named Popoff pushing plastic packets of mystical spring water that people spent money on and drank and got money or good luck while Popoff has reaaaally good luck.

The commercials, guys. They're out of control. I've gotten too used to streaming or watching YouTube and so most of a 30-minute workout is commercials because they play them for about 8 minutes or so. Endless commercials. One after another after another after another. And when you flip the channels, you find that cable stations apparently work in cahoots with each other to play their commercial breaks at the same time so there's no joy there. Basically, a workout s two-thirds commercials and nothing about them inspires a person to run.

I go to a gym where there are strict limits on what people can do with their phones and cameras, but a few years ago I went to Gold's Gym which featured preening peacocks constantly posing in front of the mirrors in the weight area, taking photos. My biceps! My delts! My abs! My lats! Check out my guns! I will never understand the need for people to photograph themselves or in any way document their workout with photos or have someone photograph them as they work out, and post it on social media.

I mean, I understand it, sure. It's a kind of virtue signalling; maybe we should call it health signaling. I attempted it once myself because I sure hate to miss out on popular social media trends; I posted a photo of my feet in my gym shoes as I sat dejectedly on a bench, about to start my workout, with the caption that I was at the gym, where hope and joy is vanquished. Did I do it right? 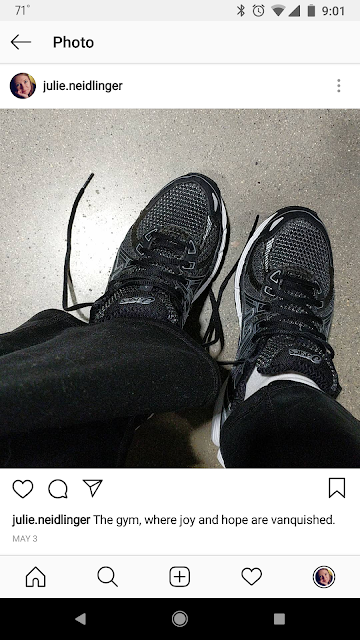 "Technically, we went to the gym," I reiterated dejectedly as we grabbed our gym bags to head to the door.
Labels: health