We welcome your opinion. 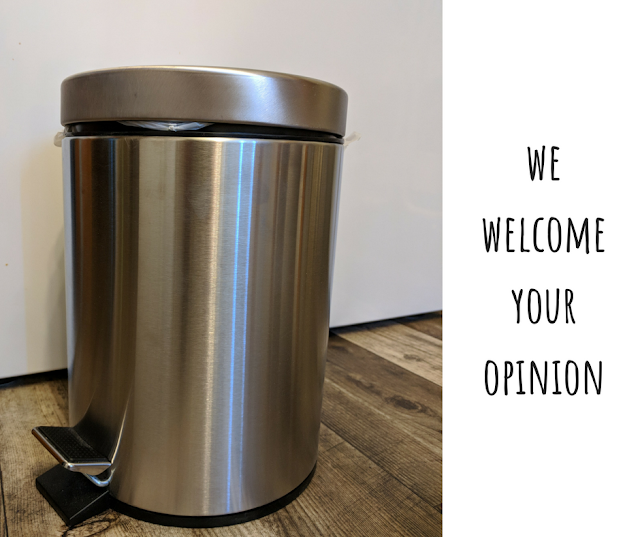 This is a day and age where everyone thinks having a strong emotion/opinion is justification for sharing. They think the First Amendment is somehow a guarantee that they get to share their opinion with anyone and that it must be given "due respect."

You may have the right to free speech, but I am not obligated to listen nor care.

But the shotgun approach to receiving unsolicited opinions from random strangers is of zero interest and curiosity, of zero value.

One of the things I, as a reader, love the most about an actual paper book (or magazine) is that I can simply read the information without having the option of reading other's opinions on the author or his/her work, as well as not having an easy way to express my opinion should something rub me the wrong way. It is a good thing to read a book and chew on it in your own mind without the mindlessness of crowd opinion having an effect on your final decision of the book and what it means to you.

I joked with a friend who works on Capitol Hill and who recently had to deal with a media smear campaign that was short on depth and wide on inflammatory language. His boss had tweeted some updates and the responses were the usual yapping kickdogs of American citizenry, everyone with their pet hashtag and intersectional activist rage and f-bombs.

"If I were a politician or public figure," I said, "I'd put one post up on my social account. It would be a photograph of a garbage can, and it would say 'we welcome your opinion' and I'd never check the accounts again."

Obviously a politician, as a public servant, really must listen to constituents, though I question the usefulness of social media in actually hearing useful opinion (and your actual constituents -- during the pipeline protest our local politicians were bombarded with ridiculous opinions from people from around the world, whose opinions mattered zilch because they aren't taxpayers in North Dakota). But anyone else? Is every other public figure not working for the public on the taxpayer dime beholding to the public's opinion of them and their work?

The very act of being made known by whatever it is you did (and in this day and age of social media, it doesn't take much) does not mean you are obligated to hear the opinions of others. There is no legal compelling reason that others demand you hear their opinions.

Still, you hear and read these people saying things like "they're a public figure they have to put up with it." No they don't. They owe you nothing. If you don't like what some public figure said or did, then don't buy their book or go to their movie or whatever it is. But your opinion on them matters zero.

I have a pretty strict blog EULA/comment policy, one that my early blog was a bit famous for back in the early 2000's because I spelled out, in no uncertain terms, that I had no obligation to the greater good of humanity or the historical record of the internet to allow any and all opinions on my website. (The current version of my EULA is, if you can believe, far more toned down than in the past.) I likened it to private property rights. For the most part, if you were polite and debating on target, I didn't care if you disagreed and welcomed it. But if you were a douche? Nope. Delete.

Social media, especially Twitter, makes it difficult now. This is why Twitter is an absolute sewer and I left it back in January and have never once regretted it.

I don't mind hearing negative opinions of my work, but the truth is that most negative opinions I receive now are big on passion (read: anger) and small on well-thought logic. Or, are like negative book reviews by people who haven't read the book. Why would I care about such poorly thought (if there was any thought at all) opinions? The opinions of uninformed idiots have zero value; it's unfortunate the social media and websites allow them to vote up/down anything.

Rare is the person who responds to a public work, public figure, creative work, etc. in a carefully thought-out manner that helps others rethink and maybe readjust their own opinions.

So go ahead and put a garbage can up and be done with it.

I'm sure you have an opinion of this. Go ahead and write about it on your own blog.
Labels: blogging social media