Chuck and Jack's bed and breakfast.

In 1991, my brother Jerry, who was working as an electrical engineer at the time, bought my family a Gateway computer, a top-of-the-line 386 powerhouse, with a laser printer. We weren't a family who had a super fancy house, new clothes, or stuff like that, so getting a computer was an incredible experience.

You have to understand the personal computing timeline, and how uncommon it was to have a computer at home. Most of us were exposed to the old Apple computers at school, the one where you had to have a boot disk, with monitors attached to the keyboards.

I believe we were one of the first in the area to have a computer in our home, and it was a very nice one. I was super excited to tell my shop teacher ("Industrial Arts") the next day because he was the computer guy at school. I told him about the computer, its specs, the software my brother had bought to go with it, and things I'd already learned.

I spent hours muddling around with the computer, learning what I could do with the C: prompt, understanding how a 5 1/4 disk worked. I cannot tell you how exciting I found that computer, and that I could design and print right there at home. It's so common now, but it was such a joy to me then, and I was thrilled to be able to call Jerry on the phone and talk to him or ask questions about computing stuff. I learned to open up the computer and add cards and mess around.

Those were the glory days.

Apparently, I got a bit carried away with making joke publications.

A friend visited the home farm a week or so ago, and texted me a photo of something she'd found in some old papers, something we'd concocted as a joke for our dads. 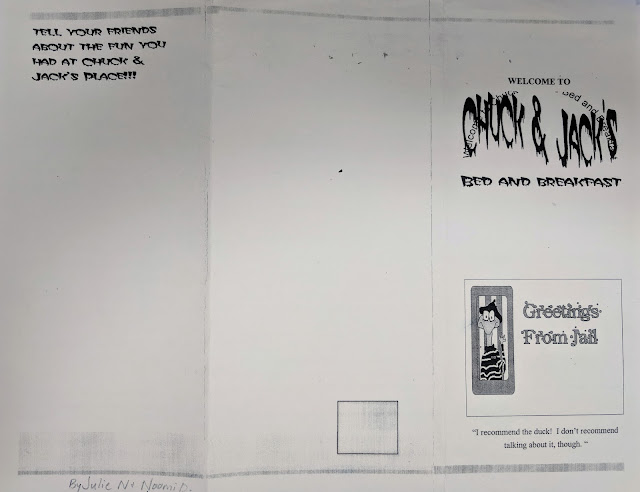 I've no doubt this stemmed from overhearing yet another hilarious conversation that our dads had, this time regarding ducks, wetlands, and farm regulations. 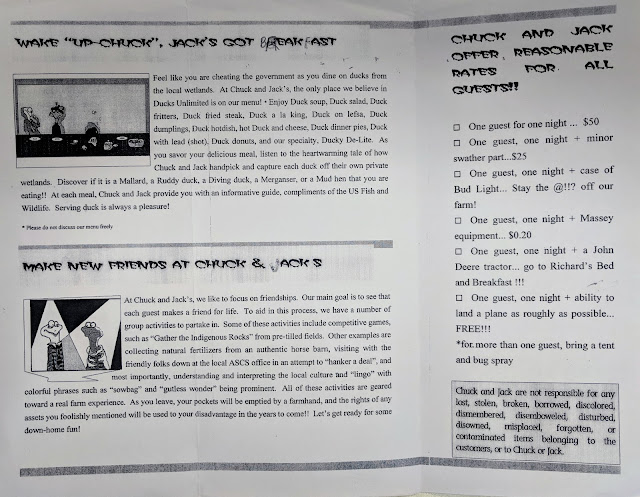 When she brought me a copy, I immediately recognized what we'd done.

"I made that in Ami Profesesional," I said. "I drew those cartoon salamanders all over my notebook margins when I was a senior in high school, and I'm pretty sure I drew those illustrations in Microsoft Paint..."

I still have a thing for publications. At one point I had a little newspaper I sent out to a few blog fans that I called "The Occasional Falsitator" (I was way ahead of the fake news trend). I also created a few digital publications you could download on my blog back in the early 2000's, before there was social media. I think they were called Lone Prairie News, and they had articles and activities. My most recent foray was Lone Prairie Magazine, a six run quarterly full-color magazine I used to jump start my writing for my first book. I'm still dabbling with some ideas on a publication.

But frankly, nothing will top the quality of that fake brochure you see above. I mean, just read those articles. Pure gold (if you knew our dads, at least).
Labels: family miscellaneous technology