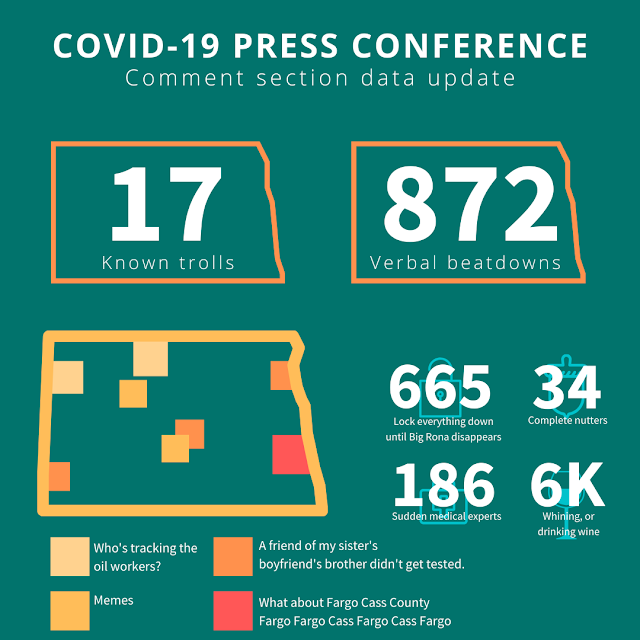 Those of us from North Dakota have become familiar with the social media updates provided by the state regarding the pandemic stats. The data has been clearly provided in standard visual forms, including additions that people have requested. They've done a great job.

The daily updates look something like the graphic above.

The graphic above, however, was one I made after several days of observing the comments section of the live (almost) daily press conferences with the governor and other state officials.

For full clarity, I can troll as bad as the next.

Let's just move on. I can't make an promises about not being a troll.

What happens in the comments section is mostly a fixation on Cass County/Fargo, and then a sort of listing of the population density and essential nature of various stores (as well as non sequiturs about "Tiger King" on Netflix). After stating which stores had too many people inside, they use that as a springboard to demand the governor put out some kind of shelter-in-place or lockdown order.

Let's forget the long raging rant I could have on the second part of that and focus on the experiential proof these professional worryists use to justify their demand: that they see too many people in the stores. I actually couldn't say one way or another since I AM NOT AT THOSE STORES. Which, of course, is kind of the point. 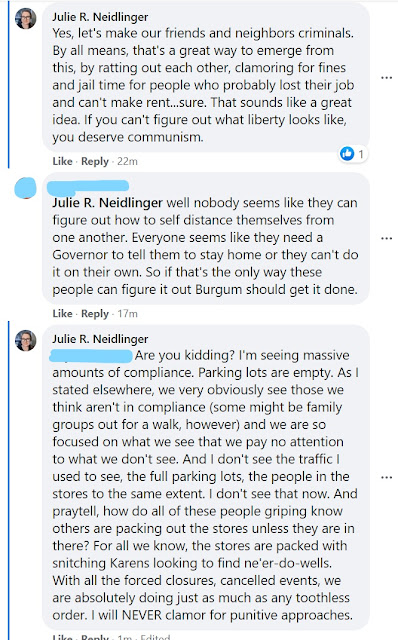 I have honestly been in few stores, but when I have, I notice a real reduction in people. And I also see noticeably emptier parking lots.

Yet this adults-tattling-on-other-adults has turned out to be a bit of a phenomenon.

I spent some time on both Facebook and Twitter, reading story after story of (mostly) women calling the police, confronting, or going onto neighborhood apps (such as NextDoor) or to the HOA to call out or complain about people. Some people were simply sitting with household members in their own driveways and had police called on them for being outside of their house. These people seem to have made Olympic sport out of passive aggressive signs, mobile photos for shaming, and other methods. Nancy Kerrigan never had it so bad.

For decades I thought the rise of the machines would be the future horror. I had no idea it would the Karens all along.


A Karen is a term for a woman (generally late 20's through 50's) who is a bit obnoxious, feels entitled, thinks mostly of her own world and self, and is the kind of person always asking to speak to retail or restaurant managers to make demands or complain. She likes to nag. She'll never order anything straight off the menu. Her nose is in everyone's business. Her way is the only way. Freedom is most achieved, for her, if everyone complies with her preference. Her fear or annoyance dictates what others should or shouldn't be able to do. She determines what is essential based on her sphere of existence, and will hold you to that definition.

Some of those kinds of stories that I see online that I've mentioned are not what we're experiencing here in North Dakota, thankfully. This is because the governor hasn't put out any kind of executive order that gives punitive enforcing power against people, but has instead repeated the strongly encouraged guidelines. So we don't have an official order in which we can't go out and about. I can go for a drive (a great pasttime up here, especially with gas at $1.79!) without being fined.

In North Dakota, the Karens can b***h and whine, but they have no hope of getting their neighbor a $500 fine, or the man at the store trying to buy garden seeds arrested for veering into "non-essential" activities. So they just go online, mostly in the comments section of North Dakota Health Department Facebook posts, and express their concerns. 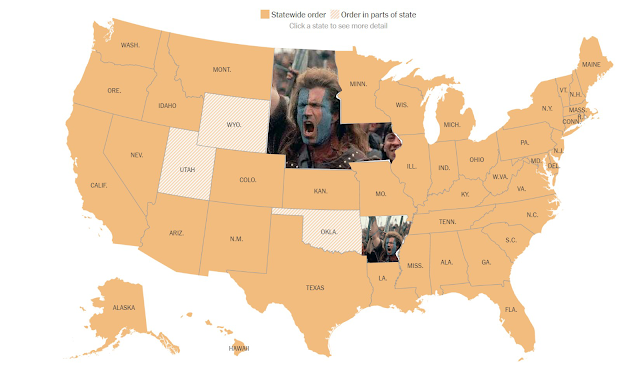 The lack of an order is still big, though. We aren't ordered, under threat of punishment. We are asked. So this means I can get in my car, go to the store for groceries or sewing supplies, get a cup of hot chocolate at the drive through, and head home without worrying about being arrested and fined simply for driving. I don't have to justify my trip. I don't get arrested for not wearing a mask.

Still, some Karens have ventured into vocalization out in the wild.

"I can't wait for this to be over so I can go to the grocery story without feeling like a criminal," my friend said.

We're either all paranoid someone is judging us for what we are buying or for even being there, that people are secretly keeping tabs on where we stand, if we're too close, how long we're in one place, what we put in our cart, if we go the wrong direction in a WalMart aisle, wondering if we're there for an "essential" reason (as if it were up to others or the government to determine what is essential to me), hoping no one will take our photo and post it somewhere in social media where people will discuss or dox us.

I'm starting to believe the meme that said if you'd snitch on your neighbors for leaving their house, you'd snitch on Anne Frank and Harriet Tubman. Some people really get off on the power trip. They see a chance to get some power in their tiny life doing the thing that's easiest: tattle on others.

In a community Facebook group where they talk about various helps and issues locally during this pandemic, one woman related a story of how she went to WalMart to buy eggs for the group home she works at. She bought two 60-packs of eggs, and could hear the whispering and feel the eyes on her as she pushed her cart away. Another woman responded that she was doing shopping for herself and her elderly parents, and a woman accosted her for taking two toilet papers, asking her who she thought she was.

In Target, my friend and I watched as an employee dressed down two women pushing a cart with two packages of toilet paper. They were told they could only have one. The women replied they were simply sharing a cart and shopping together. The employee proceeded to ask more questions to determine their living situation and if they lived together. I never thought I'd see the day when Minneapolis-based Target questioned the living arrangements of people.

That's all it took to have various versions of a police state settle in around the country , and to get us snitching on and confronting and shaming friends and neighbors for buying eggs, or to have to get judges to issue restraining orders against cities so churches could hold drive-in services without being arrested.

Be as responsible for yourself as your level of fear requires. If you think people shouldn't leave their house, then don't leave yours. If you don't want to work your job, let your boss fire you and take unemployment, but don't insist the government force others out of work when they don't want to be. If you don't think it's essential to buy something, then don't.

UPDATE 4/16/2020: The Karens are still alive and well on social media, describing stacks of bodies, suggesting that anyone who wants to get back to work and open things up wants grandma to die, often citing her own family members who could die as a reason to lock down 350 million other people. As one friend noted today, it'll be nice to get back to regular life where no one ever died.

This is probably the hashtag of the year: 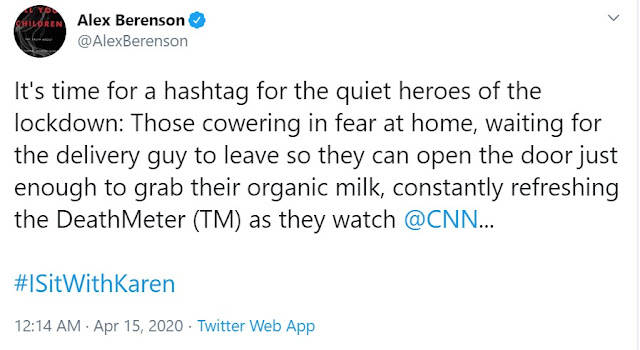