In yet another shocking revelation from the WHO or the CDC (they take turns changing their mind), we now know that the spread of Big Rona doesn't necessarily happen as much as previously claimed in terms of asymptomatic spread.

[A]s researchers have been analyzing contact tracing data, they found that the virus is unlikely to be spread by asymptomatic individuals.

"From the data we have, it still seems to be rare that an asymptomatic person actually transmits onward to a secondary individual,” Dr. Maria Van Kerkhove, head of WHO's emerging diseases and zoonosis unit, said at a news briefing. "It’s very rare."

This is interesting, because for about two months, we've been told that people who are outwardly healthy are still part of why (mostly why, even!) the virus was spreading, which is why we were to wear masks, irradiate ourselves coming and going, fill our bathtubs with Lysol, wear plastic bags over our head, wear masks over mostly our chins, and also stay away from other people by staying six feet apart (or, as one catchy socially concerned on-point graphic designer illustrated, we should leave about the space of one dead grandparent between ourselves).
Granted, there is still room for scolding and shaming, so those folks whose job it is to get into everyone's business may still have some legitimate work to do, since the WHO won't rule asymptomatic spread out:

"I did not say that asymptomatic cases cannot transmit; they can," Van Kerkhove told TIME. "The question is, do they? And if they do, how often is that happening?"

She explained that one concern is that some people may have mild symptoms, or ones not commonly associated with COVID-19, such as muscle aches and fatigue, and may not realize they have contracted the coronavirus. That makes it difficult for contact traces to know if a person was truly asymptomatic while they were spreading the virus.

"We’re not ruling anything out," Van Kerkhove said. "We're not saying that [asymptomatic spread is] not happening. But we're saying more transmission is happening among symptomatic individuals. People are looking for a binary, and it’s not that."

In a time of crashing economies, destroyed businesses, and lost jobs, we don't want the internet scolds to also lose their jobs. We have to try to hold onto some normalcy.
Still, I'm interested in serious scientific study, so after careful research, I uncovered a fascinating correlation that the WHO and CDC have neglected to discover:

To be more scientific, I charted this complex correlation: 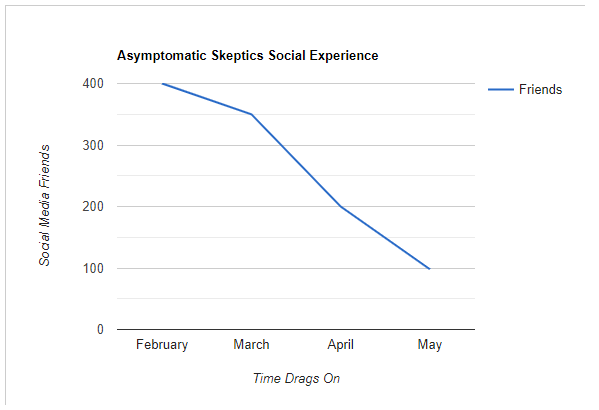 That's the real social distancing story right there!
I'm sure the WHO and CDC will ultimately retract it all if they sense a disturbance in the great mask universe. I know they sort of walked it back the day after the initial report came out, because Fear, Inc. is a huge donor in this unofficial global election.
Funny thing about the 1%. We're totally against them when it is in terms of money and we'll fill Zuccotti Park with crowded people and unsanitary conditions in order to occupy Wall Street, but we'll crash the global economy in terms of a virus that 99% will likely survive.
No matter.
Continue on with the masks or Molotovs, whichever it is you're into.
Labels: pandemic social media