The simple art of murdering your reader. 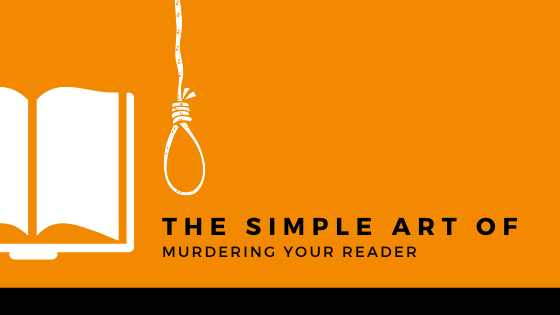 Raymond Chandler's essay "The Simple Art Of Murder" opens with a paragraph taking to task the "intellectual pretentiousness" that fills the best-seller lists and the air in the room at a book club. Perhaps I re-read that paragraph several times because I like to hear someone else say it.

I was in a book club once.

You do not tell the book club about the book A Reader's Manifesto, which rails against the purple prose of so many Big Name Authors, especially if a the next book the club is to read is included in the list of examples of bloated writing.

Bloated writing is a real thing, by the way, particularly tied to youth (or self-importance) and, in my case, definitely not tied to youth but a lack of clarity of thought in which the words are racing out of my head and the winner might be the predicate.
Anyway.
More than once I've had clean-up writing jobs come my way in which the original writer clearly had talent but, being young perhaps, thought they had to use all the adverbs now, while they could, in case they didn't live to see their 40s. I look in my own early writing and could cry blood, it's so bad. "The Jabberwocky" reads with more clarity than the twelve paragraphs I would use to describe how windy the wind was.

Bloated writing is not the same as complex writing, though. I like a good bit of complex writing in which sentences are long, winding, and built back on themselves, with dashes and semicolons and all kinds of parenthetical statements tucked right in requiring a kind of archaeology to decipher them, sort of like reading one of Paul's letters in the Bible and wondering when he'll stop to take a breath so you can go back and attach action and description segments with the correct noun. One of the things that I struggled with the most after leaving a job of doing internet marketing writing was to get rid of the writing habits I'd been required to pick up, habits that I felt left my writing staccato-sounding for the reader. Writing for the web and for that audience required such habits such as excessive use of headers, bullet points, and not-too-bulky paragraphs. Sentences were brief. Thoughts were expressed in as few words as possible, no meandering allowed.

As you can see, I still have some of that going on. I hope it is in a reader friendly brain-exercising way, however. I value the mental white space that periodic shorter paragraphs and sentences give, but I want to be rid of the laziness of bulletpointing and of using headers, techniques that let you skimp on figuring out how to transition with words as if you were trying to create a piece of whole cloth not with weaving but with Scotch tape. For some writing that's appropriate, but there is greater pleasure in having the outline be a silent partner, if at all.
That's not to say I don't appreciate satisfying endings. Somewhere in the murk of purple prose and the war between complex writing and marketing prose and art house books with endings that confuse everyone, including the reviewer for the Big City Newspaper, is a lovely denouement.

Several years ago, while meeting a potential freelance writing client at a coffee shop, I revealed the ever-hideous secret that I enjoyed whodunits. I didn't care if they were Christie or James or a cozy mystery. I just liked them.

She seemed appalled. "Oh no. You can't be serious! They are so formulaic."

People who dismiss books that are formulaic seem to have completely misunderstood the beauty of the formula. A formula brings resolution. The numbers work out.

There was a time, in college, when I sought out art house films, or the dark dramas that win all the awards. After watching "Leaving Las Vegas" and feeling utterly devoid of any sense of hope and wishing I could wipe that vision of Elizabeth Shue from my head and return to "Adventures in Babysitting," I wondered, ever briefly, why I had just paid $7 to feel horrible? (The price of feeling horrible has gone up considerably since then.) It was much the same as my friend, a guy, who rode a hard-seated saddle ride at Valley Fair in Shakopee, Minnesota, much to the chagrin of his nether regions. I had a wonderful ride, but when he got off of the device, he pointed out all of the other men wobbling away. He told me that the new slogan for Valley Fair should be "For twenty-nine bucks we'll punch you in the nuts."

A formulaic book never punches you there.

"I have no problem with formulas," I told the woman.

"But there's no characterization," she said. "How can you stand the one-dimensionality, the lack of emotional and intellectual depth?"

"Poirot was not one-dimensional."

I only wrote one blog post article for that client. It's just as well, really, because blog posts follow a formula.

Book clubs are irresistible lures for serious readers, holding the promise of exposure to new books and heady discussion in which you form long-lasting friendships with fellow bibliophiles, possibly sipping sherry in the drawing room at some point in the future. Most book clubs seem to consist of female members, something that drove one book lover to reddit to ask if they were meant just for women.

He wondered if the only option for male book lovers was to discuss the book with other XY's on the internet. There were several responses, but being it was a discussion on reddit, I won't share them verbatim. The consensus seemed to be that most book clubs tended to be women, but there were some men involved and he ought not be shy. More succinctly (and in a neutered, edited version), one user said wisely: "Heck no. Both genders are equally equipped to misinterpret Finnegan's Wake."

But most book clubs never get a chance to!

Oprah was a driving force behind bestsellers, waving her scepter and determining which obscure author would be an overnight success.  (I suppose Reese Witherspoon is the new version of Oprah in the book club realm today.) The problem is that many of her choices were of the mom-dead-child genre, which seemed to fertilize the idea in book club leaders that unless a parent was struggling with the death of a child (or something similar), or wrapped up in a lascivious affair, the book had no emotional merit worth discussing. Additionally, this topic inevitably led to the women in the group discussing their own experiences as a mom, which inevitably led to the women in the group veering off into diapers and daycare. 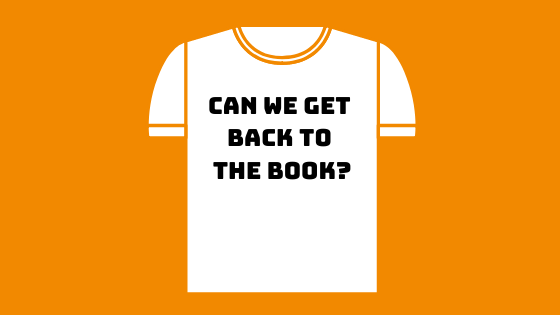 "Can we get back to the book" would have been an excellent T-shirt to have worn to every meeting.

I had one hope, the kind of hope that is born in democracy and patience, a hope that centered on the fact that the book club rules allowed each regular attendee to have a crack at choosing a book for the group to read.

My turn rolled around amid the furor over Elizabeth Kostova's 2005 novel The Historian. Kostova's novel was a reworking of the Dracula legend, less Anne Rice and Twilight and sappy gore, and more literature and history, filled with mystery and thrills and subtle romance set in the world of books and libraries. Kostova's work had generated buzz in the publishing industry, and she'd received a hefty sum of advance money. The book had just come out, I'd started reading it, and it was good.

It was also only available in hardcover. And it was hundreds and hundreds of pages long. Really, it was about four inches thick. But I'd suffered through the Oprah selections and it was my turn and I was determined to introduce a different kind of book into the club.

"I didn't actually read it."

"The library couldn't get me a copy."

No one, besides me, actually read the whole book. Half of them didn't even bother obtaining the book. Discussion veered towards parenting, and that was my last book club meeting. I determined that I could continue to read on my own, and that I enjoyed not having to discuss the book down to the DNA of the author and what they perhaps had eaten the day they wrote that particular chapter in order to enjoy it.

Now, if I'm fair, I see that the book club members favored their formula. Child dies. Mother is heartbroken. Mother turns to handsome gardner/neighbor/pool boy for love. Mother feels reborn. Mother destroys the rest of the family but doesn't care because she suddenly feels alive and lives in Italy where, in 20 years (which the book does not cover), her lover will have left her and she'll be serving pizzas to tourists. All of this is done with rich adverbs to the power of 100.

I still maintain that Poirot is not one-dimensional.

If I had not chosen The Historian, I was going to choose A Canticle For Leibowitz.

They had no chance.
Labels: books writing