Watching our death from behind a screen

You probably have had the experience where your vacation photos never do anything justice.
Maybe you saw a bit of beautiful scenery or were at an event and you felt the uncontrollable urge to take a photo or video and pretty soon you find that you are spending more time looking at the tiny digital image on your phone screen instead of the three dimensional reality on the other side of it. You take something big and amazing and squash and flatten it down to a few manageable inches. I remember taking video of the fireworks at Epcot and then I realized I was actually missing the show and I put my phone away and just enjoyed being present and in person.
Screens make complex things flat. Screens make big things small. Screens can also make small things big. Screens create a distance. What we experience from behind a screen is determined by the size of the screen and our decision to make something bigger or smaller than it is. With a screen, everything is variable and everything is ephemeral.
I watched the fires burn across the nation the other night as cities were looted, burned, and destroyed and people of all colors, in uniform and out, were hurt beyond belief. Our nation's capitol was periodically lit on fire, and our monuments defaced.
I got to see the privileged of academia joining in, encouraging it from their safe homes. For example, the professor who had a whole Twitter thread going on how to tear down obelisk monuments; the thread went on to how to take down statues of horses and such, targeting weak spots.
Or the privileged man who was thrilled, apparently, to see $30+ million affordable housing building burn, but got upset when the rioters got near where he lived and ruined a Starbucks. 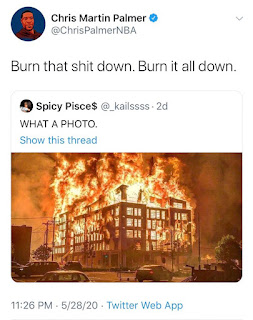 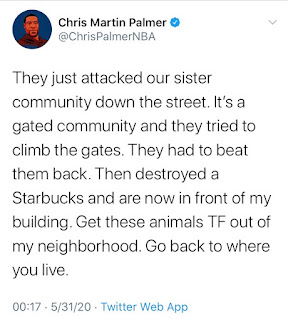 My social media feed was a mix of horror, lectures on how to properly be a non-racist white person towards POC, Christians who meant well but added way more rules to being loving towards other people than the Bible ever had (often with race-tinged guidance), or purple-prose filled posts where I guess white people tried to prove they weren't racist by referencing every minority in their life.
It was too much. Every possible opinion and news bit coming from all directions. My eyes glazed over and I felt like I was back during the pipeline protests, a glassy-eyed machine that stayed up late and got up early, totally compartmentalized into gathering screenshots, documents, and information for my book. I didn't have time to process the nasty messages I received nor the horrible things I saw happening in and to people in my state.
That whole time was like swimming in sewage. I don't want to do it again.
Then I came across this image.
For two months of a pandemic (which has vanished from mention by the fear-mongering media almost overnight as the riots continued) we've been told the good and right thing to do is stay safe at home, engaging other people only from behind the screens of our computers and being entertained by the screens of our televisions. We were already on this path, of course, but the last two months gave it the veneer of being the healthy activity of heroes.
Behind a screen, you're safe.
You won't die.
You're protecting others.
Perhaps, locked at home behind a screen, things get pent up.
So as I watched all that was going on in the riots last night (and the previous few days), I understood this Titanic image anew. We are going down as a nation, watching it on screens. We watch store owners, even elderly women, get beat nearly to death on our screen. We watch celebrities who live in gated communities and surrounded by wealth and protection bail out the rioters and act gleefully about the destruction on our screens. We watch affordable housing burn, people's homes destroyed, and community businesses shattered on our screens.
Click! Share! Comment! Angry face! Like face! Next news item.
We're sinking.
Behind a screen you are not safe. You are trapped. You are tied to an anchor bringing everything down to deep destruction because you can't stop videoing it, you can't stop playing to the video, and you can't stop consuming the video.
You put a device between you and reality. The train is coming at you and you won't step off the tracks because you want to get video to the last possible moment. We're so used to watching things happen to others on our screens that when we are filming, we forget we're in the actual moment; instead of being observers, we are to respond. But we don't. We keep video going, offering commentary of what is happening, while someone is beat nearly to death instead of helping them, because we want the cool video. We're all so busy documenting what's happening around us, and documenting our lives, that we don't realize we're actually documenting our own death.
Screens make us one-dimensional, over time.
Most people aren't as awful in real life as they are behind a screen. But most of us spend the majority of our time behind screens, and so we are essentially the worst version of ourselves most of the time.
Do you want to stop the ship from sinking? Do you want to stop drowning? Do you want to make a real difference instead of joining of the thousands of people who are seemingly gleefully possessed by evil, greed, and hate running amuck on the streets? Do you want to stop feeding the base nature of people who do things or behave a certain way just to get a photo or video of themselves to keep their follower count?
I know I do. I know the struggle, but I know I do want that.
Start by getting out from behind the screen.
It's hard to meet a real human being for coffee or a meal right now because some states are locked down by the pandemic and frankly, many restaurants and shops are either out of businesses or are now destroyed and won't ever open again.
But still try.
We gotta get out from behind the screen.
Best option? Turn to prayer and your Bible. We NEED that right now.
Then, maybe plant some flowers. Make something better. Maybe go for a walk and don't loot while you do it.
Labels: current events social media technology