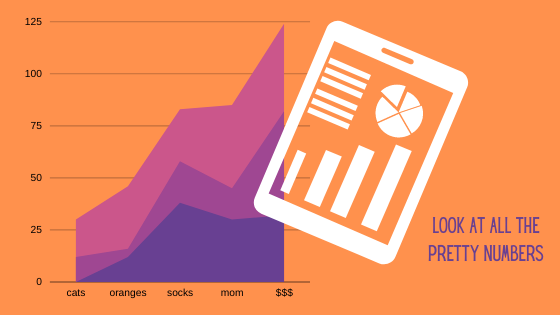 In the book I wrote about the pipeline protest from a few years ago, I had several sections in which I talked about how the news was presented in a tricky manner. Whether it was purposeful or not, the language used or the frequency of how something was reported had a way of skewing what was really happening. Even if a reporter could say "everything in my story is factual" there can be problems.
What I'm seeing during this pandemic is the following issue:

When the majority of your reporting is on the minority of reality, you are lying.

In other words, news outlets report the most sensational or emotional stories, but those stories aren't actually a representation of the reality but are, instead, an anomaly or rare case. For example, a local news outlet recently reported a story on a 9-month old baby from Minnesota who died from Covid. The comments section was filled with horror, fear, and calls for masks and lockdown. While it's possible to tuck into an article the reality that children getting Covid is very rare, and dying from it even more so (lots of zeros after the decimal on that one, folks), the one flashy story made the rare scary scenario seem as if it were the likely reality.
No one reads story after story of kids who didn't get it, obviously. "Four kids playing in playground return home without any illness" does not sell anything.

No one reads the story of a child who tested positive and had zero symptoms or concerns. But people will read about a baby dying and so the rare sad scenario becomes the one we hear about the most and we register it not as rare, but as the typical scenario.
Babies are not dying en masse from this virus. At all. They simply are not.
Another example is how we see story after story, or social media posts, about people who got the virus and got sick. We always have the phrase tucked in there that "we didn't think it was that serious" as if to drive home some kind of point, as if to suggest that people who aren't doing the "right" things are people who don't think this is serious or that the virus doesn't exist. That's not necessarily true, but the stories told keep driving that point home because they seem to want to connect non-compliance with people who don't take things seriously.
We have celebrities using a really sick friend as a jumping off point to yell at fans to "wear their damn masks." While their concern over what happened to their friends is understandable, we have to look at the number of people who haven't gotten that ill at all and weigh it for a full picture.
The homemade videos of people who have recovered who go into laborious detail about how awful it was and who lecture people to take it seriously are not at all balanced by the people who could say "it wasn't bad, I didn't really know I had it." Nor do we see the same virality (or even videos made) of people who get sick from other illnesses at other times.
There aren't too many stories on the millions of people who tested positive and had zero symptoms or light illness. You don't see many feature stories on Jim Bob who tested positive and never knew he had it at all.
Why? Because that's not a sexy story. It also doesn't serve the purpose of the fearful narrative. We hear about the family who all got ill from the virus after going to a funeral in Minnesota, but we don't hear about all the people who participated in other similar events and didn't get ill at all. "Local family has reunion in South Dakota and comes home virus free" is not a headline that sells anything. It can't be used to justify mask mandates and lockdowns and fear.
Look at your local news feeds. They are full of story after story that highlight the anomaly. Even if they tuck data into a story in an attempt to add context (and rarely do they do that), the sheer volume of stories with headlines of a context-free nature do the damage. People sloppily read headlines and make mental tallies of what seems to be happening.
I don't want to say it's on purpose with intent to mislead. It's more likely with intent to get clicks and web traffic. But it is happening.
What really bothers me is when a public health institution does something similar. We know public health has a narrative. It fits with the CDC. They parrot that out, whether or not the people of the state might benefit from additional information.
While I think the North Dakota Department of Health has been doing a fairly good job with presenting data and numbers, we've become accustomed to the "daily death count" and related positives. Each day we tune in to see new positives, how many died, and how many are in the hospital. We ought to also be presented with some comparative information to put it all into perspective.
Perspective, however, doesn't get people to embrace mandates. Fear does.
Check out the following graphic, which was made by a private individual and not the state.
I realize there are many people who don't know how to read charts or look at the key. I've pointed some folks to the Ethical Skeptic Twitter account and realized, by their response, that chart and graph interpretation is not being taught in school or something. Nevertheless, this graphic is very straightforward once you look at the key. This would be very useful to share with the state. But we instead see daily counts that make this virus appear to be taking the entire population down.
Even better, the designer of the graphic created one to compare our state's data with the flu.
The designer provided additional information for the flu graphic:
"Below are the influenza cases for the past two seasons in ND. I chose to go back to 2018-2019's flu season for comparison because some of the data made it seem like Covid affected the flu case numbers this year. I'm still using 762,000 for the total population in each infographic and I'm only showing confirmed cases since I don't know if there is such a thing as a negative flu test (or at least they don't list any such data). There were 21 reported deaths due to influenza during both seasons."
I would love to see similar visual data from much of what the CDC provides, because as I've come to learn, you can tell people numbers, but it doesn't register. You have to show them a picture.
The problem is when lovely graphics are used to deceive, whether on purpose or by accidental omission. Check out this example: 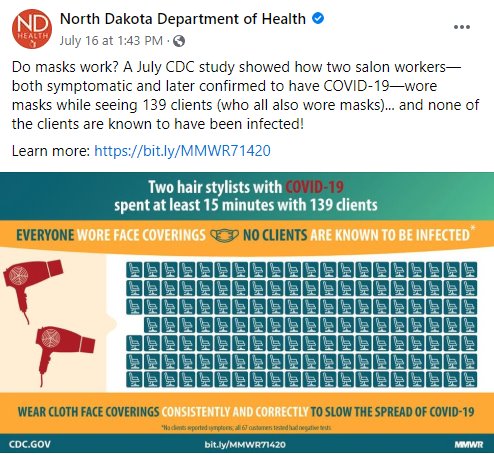 That's a great graphic, and along with the written explanation, it seems like a lock, doesn't it?
Not so fast. 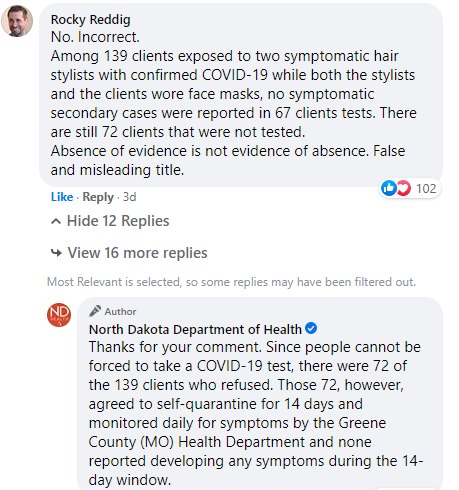 I don't know Rocky, but I'd like to give him a prize for not accepting the reporting blankly and instead, going to find out the whole story with context. Yes, there's a tiny little asterisk in the graphic, but it's clear the graphic and information are intended to present a particular talking point about masks.
Great visual graphics can be horribly deceptive, and being a clever graphic designer doesn't mean you ought to be handling important data. There are few things tricker than presenting data visually in a way that is accurate and not misleading.
It is also noticeable that the North Dakota Department of Health has not made a graphic on the story of the Arizona teacher who died from Covid despite socially distancing from the other two distance teachers, all of whom apparently wore masks, used gloves, and used hand sanitizer. Instead of that story raising questions on the validity of mask mandates, it is being spun to say "we shouldn't open schools."
Data is morally neutral. It's how we present it, talk about it, exclude it, and contextualize it where it becomes a weapon. We can take the same data and steer the conversation in one direction.
Again, take note of the repetitiveness of the stories you keep hearing. When you see data that says 99% of people survive and millions were asymptomatic, you should wonder why the stories you keep hearing are death and horror. The coverage volume is not reflective of reality, nor is it wise to take one "success" story and pass it off as proof to an entire state looking to you for guidance.
Labels: journalism pandemic