Dying with the help of too many physicians

Who knew, starting in 2020, that I was responsible for every immuno-compromised person's contact with potential viruses and bacteria instead of them being responsible for themselves. I don't even want to get into the logic of equating the right to randomly shoot and murder people in the street with not wearing a mask for a virus. If that's the medical profession's logic, no wonder I still have a leg fracture somewhere below my patella.
God forbid we are individual people, unique in need and problem. 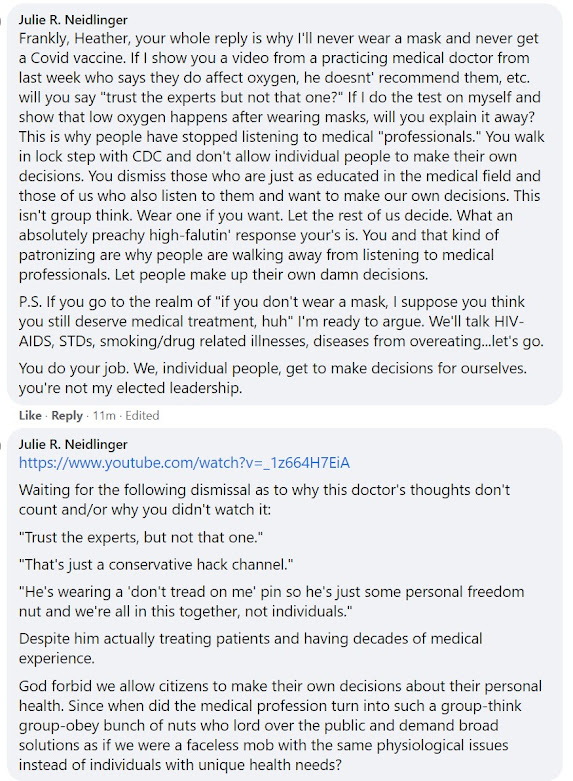 What video did I share? This one.
But they won't watch. And if they do, it's only to start arguing. It's as if they feel it's their job to go around and keep all the little mice from getting out of their medical cages.
Why do these medical doctors have this God complex where they believe they know better for me than I do when it comes to the decision I decide I will live with? If I ask them for information, if I ask them for opinion, if I ask them for direction, does that not still reserve for me the right to come to my own decision? Have they lived my life and know what things hurt and when? Do they know my body as well as I do? Do they know the pains, quirks, and patterns of it as well as I do? Do they know what level of risk I'm willing to accept? Do they have to live with the result of what I decide and the procedures I agree to?
No.
They do not, especially now in the age of electronic health records where half the time some grumpy nurse* won't even meet your eyes as she plows through the pile of data she has to collect before the doctor strolls in for five minutes before sending you out the door with a prescription for $50 aspirin. You're scared, uncomfortable, unsure what's wrong, not sure how to describe it, and you get a nurse who gruffly gathers data and then goes on Facebook to lecture people on how selfish it is that they don't wear masks. Pardon me if I think that's a system that doesn't care too much for individual people but instead, sees us as data collection points with algorithmic solutions.
They know of bodies. They know of generic problems and solutions. They have knowledge and skill on what to do with living slabs of meat, but they don't allow for individual human beings with minds to make decisions.
They don't know how mental and emotional health may be affecting physical health in each person, and electronic data, with its generic question "have you thought about suicide lately," does nothing to tap into that like an actual non-judgmental person-to-person conversation would. It sometimes feels like there's a slide rule and they use some numbers to find the answer and send you packing with a patronizing god-like response, a list of all you did wrong so you know you are never quite up to perfect health based on a standard. Some medical organization somewhere determines a standard of normalcy and of treatment and set of recommended check-ups and protocols and then hounds you into doing it and getting upset and schoolmarmy if you say "no, I don't want to at this time."
If the bedside manner of these know-it-all medical professionals is anything similar to the way they shush and shame people online, forget it. I'll keep not going to the doctor. I'll use a mask for toilet paper. I don't have the money, and I don't have the desire for some of these arrogant pusses I keep running into online to have any say in what I will and won't do because I'm not just a slab of meat, but instead, an individual human being with unique needs. Just like you are.
In the Bible, the book of Luke is written by a physician. Consider this:
Luke 8:43 -- including a woman who had suffered from bleeding for twelve years. She had spent all her money on physicians, but no one was able to heal her.
There truly is nothing new under the sun.
I'll share whatever information I want to online, Nurse Ratched, if I think it will help people in making whatever decision they decide to make.
*No, not all nurses are grumpy.
Labels: health pandemic