My fear with masks is not just the sheer ineffectiveness and how we magically went from "they don't work don't wear them" to punitive enforcement the moment you leave the house. It's not even the supposedly temporary infringement on liberty, with masks being but one component of months of little dictators hammering down on their citizens.
No, it's the aftermath.
"From here on out, you watch. We'll be pressured to wear masks, and see them, every fall when the flu starts up," I said to a friend. "Corporations will cave to the loudest and most fearful whiners."
This mask thing isn't going away, because it's part of a changed mindset of a broad swath of our population who have come to see people as being dirty, disease-ridden, and dangerous. For over half a year, all they've had shoved in their face was viral infection and impending death even with a trip to the gas station. Family reunions and weddings and funerals and amusement parks have been demonized. Governors have wagged their finger and scolded people for going to a family reunion. Media repeatedly highlights the bizarre fringe stories of people with worst-case-scenario experiences (amputations! brain damage! fried lungs!) with the virus instead of noting how rare but strange things can happen with any virus or bacterial infection. They refuse to cover the stories of anyone who barely knew they had it or recovered after what was similar to a bad case of the flu. There is no perspective, because there seems to be a reset of how people view other humans, immunity, social closeness, travel, and more.
In a post about an airline requiring masks in order to fly, the screenshots below were part of the conversation. Watch for the following: 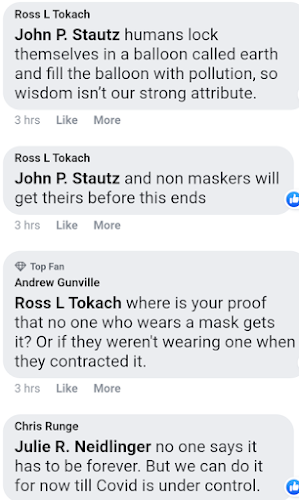 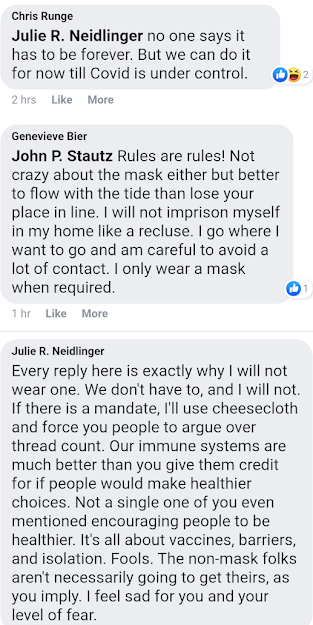