You don't put Mona Lisa at the bottom of a toilet 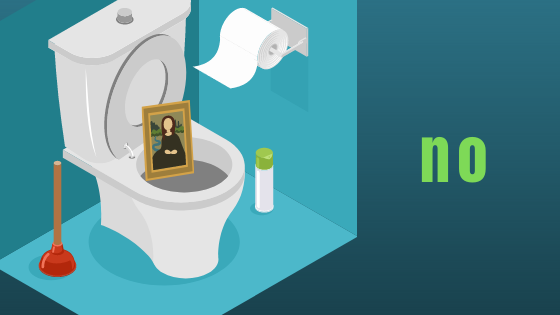 I've found the painting of the BLM* in bright yellow on streets to be interesting.
When I paint a lovely mural or do some art work, I try to keep it off of toilet seats, door mats, or under the sofa, for example, because where you put your art affects how people interact with it. The placement of the art is part of the message.
There is one painting I made in February, for example, that was for a church event I was planning that I didn't get to do because I was fired. That painting, which was intended to be a door prize, is a sort of reminder of the whole ugly mess. It's in my bathroom right now, perched on a narrow ledge right next to the toilet. You don't see it completely when you walk in because of the shower, and when you're on the toilet, it's too close and high to really take in. The placement of it lessens the impact it could have and that's the point.
Or, if you have extreme pointillistic work or impressionistic, you'd better have plenty of space for people to back up from it to take in the whole image from a distance, or they won't understand what they're seeing.
Think of Michelangelo's David, which was originally intended to be placed high above the viewer. This is why the right hand and head are so large: they were intended to be seen from down below.
So back to the BLM street paintings. The assumption is, since they are so large and on the ground, that they are meant to be read from up high. Skyscrapers, other high architecture, helicopters, that kind of thing. On the ground, because the perspective of the lettering isn't keyed for ground-level viewing, they are not easily read. You know what they say simply because you know they exist and have been told what they say. You can't read them easily without that. It's art you can't interpret for yourself, but have to be told how to interpret. I'll let you think about that a bit and let you make any logical connections you need to.
One assumes that the intention is for people who tend to be at an elevated viewing position regularly to see them, i.e. rich people who live and work in skyscrapers? That people on the street hold to the statment while people up high don't? I'm not sure. That's my assumption.
But the reality is that the average person will most often interact with them at ground level. Walking all over them (and in some cities, probably going to the bathroom on them). They painted their all-important slogan in a place where we get to walk all over it.
This leads to other conundrums.
For example, when you put art in a place where the expected and typical behavior of the use of that place could be destructive to the art, is it vandalism or a hate crime if the art is marred?
A logical person says no, but there are few logical people left in the unelected ruling mob.
Case in point: police in West Vancouver, British Columbia who, in this time of chaos, decided to aggressively pursued the identity of the vehicle that left a skid mark on a rainbow-pride crosswalk. People rightly mocked their efforts because frankly, it's silly. People leave skid marks all over the streets. Should we alert Marisa Tomei and put her positraction knowledge to use? Putting a rainbow on the street isn't going to change what cars do there, nor will it change the nature of the use of the street.
If you put the Mona Lisa at the bottom of a toilet, should you really get upset if people take a dump on her?
There's a lot that could be said about the painting of such things onto public use streets, and the use of taxpayer money, but what has always struck me is taking note of the location art is placed. It's part of the message.
As a little sideline on this thought path, there's the fellow who grew so tired of the potholes where he lived that the city refused to repair that he drew penises around them so that the city would (and did) quickly cover it up by fixing the pothole.
I'm not equating puting BLM on the streets with the Mona Lisa. I'm just saying you need to consider very carefully where you place your art. Location is part of the message.
* Every time I see that acronym, I always think Bureau of Land Management. I will never not go there first. I've heard it that way almost my entire life.
Labels: art current events