Jolly good morning to wake up and find a taxpayer funded gaslighting Orwellian ad campaign is in the works!

I have no idea what the Stop The Natural Progression Of A Virus Curve task force does on day 168 of "15 Days To Slow The Spread" but it appears they find new ways to spend taxpayer money. Today they decided to use our money to lobotomize us via marketing!

The marketing will be distributed through a variety of channels, including social media, TV and radio.

I don't want to say "I told you so" but...I kind of did. Back on August 3. If they were good task force kids, they'd follow the recent CDC guidelines that now said only symptomatic (i.e. sick) people should get tested, and that all of you folks who feel great should stop coming in asking for an ebola test. I imagine next week the CDC will say we can now put our right foot in and shake it all about.

The three groups the Obey Plebes ad campaign will target are people who feel invincible, fatigued, or are resistant to change. No word on how the elderly over the age of 80, THE GROUP WITH THE HIGHEST FATALITY RATE, will be targeted with this fresh and fun ad campaign, because they, like one other age group, aren't targeted apparently. 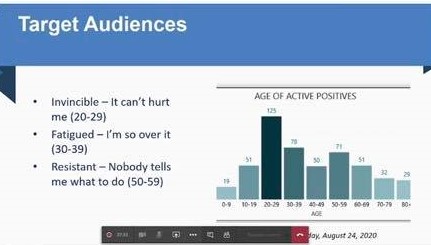 For the younger "invincible" group...well, they kind of are, data-wise, for this virus. The mortality rate for the young is very, very low. Herd immunity will come through them. Whenever I see a group of young people hanging out as normal, even as I yell at them to get off my lawn, I'm glad. Be the herd, kids!

Targeting people who are fatigued is like saying to the guy who just emerged from the desert, begging for water, "hey dude, we'll give you this glass of water if you give us one of your kidneys first." Beat-a-dead-horse marketing is one of the more noble professions out there.

For those resistant to change, so what? We've had enough change this year/decade. Thank you, stalwarts, for digging in. Your trenches are where we'll retreat when the insanity tips to level 11. Which is probably next week.

As someone noted online, my age group, the 40-49 segment, wasn't targeted apparently.

"I wonder what we're called?" she asked.

"We're the Gen-X impossibles," I joked.

It's not so much that we're resistant to change, tired, or invincible, but more that we think you're ideas are stupid and will make our own decision and don't really care to have the nanny state coddle us, thanks. WE'RE THE LATCHKEY GENERATION OF KIDS; WE DON'T CARE WHAT YOU THINK IS BEST FOR US. I guess we're the "whatever" Gen-Xers and there's no point in wasting money on us. Maybe we have a lower level on the graph because we're actually a smaller generation. Whatever.

Speaking of wasting money, $77,000 of CARES Act money was used for this. 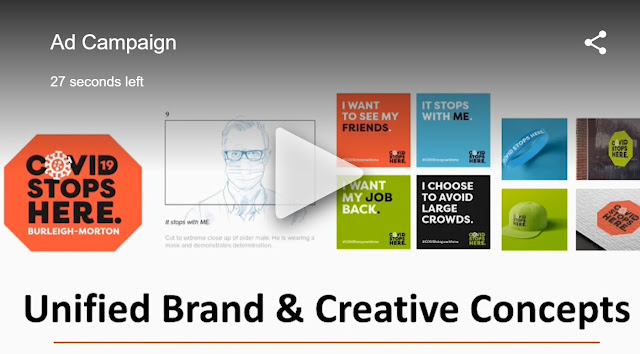 It looks like now, along with masked dehumanized faces and glares, we get to see rubber wrist bands out and about! Nothing stops a virus like a rubber wrist band. It is great for when you wash your hands and don't want anything to attract bacteria and, uh, viruses. Also, the dude in the box graphic looks like someone just put a target on him.

News flash: Covid stops whenever and wherever it wants to. Because it's a virus.

I love it when we're in a half-year-long gubenatorial state of emergency and the funds go to an ad agency for the purpose of gaslighting the citizens who paid the government that money in the first place. It's neat! If there's anything we can use more of, it's tastefully designed graphics with sans serif fonts that tell me how to think!

This year has been a great revealer of people who want to be safe in their comfy tastefully decorated gulag with shiplap and a "live, laugh, love" sticker on the wall, and those who simply want to live freely.

I shook my head in a recent conversation with the woman above, who said she was simply trying to help stop unnecessary deaths. I asked her to define a necessary death, because that should be a fun philosophical exercise. If it's about the age of when you die, check the mortality rate for age groups on this virus, and then check it for other things like smoking, drinking, drugs, and car accidents.

"Better safe than sorry!" she told me, which is a great mantra for living life in a Lazy Boy chair and developing no core muscles. I suspect that the folks who say this think the only alternative approach to life is Thelma-and-Louising your car off a cliff, but it really isn't. Healthy fear keeps you from doing stupid YOLO stunts. Paralyzing fear makes you subservient to whomever is manufacturing the fear.

But who has time for those kinds of thoughts when we have ad agencies making smart posters to tell us to what thoughts we should have!

Get yourself a pack of free printable posters to download, print, share online, and do whatever. We might not have $77K of gubmint money to go crazy with, but we can do word-of-mouth.

Unless you've covered your mouth with a mask, that is. 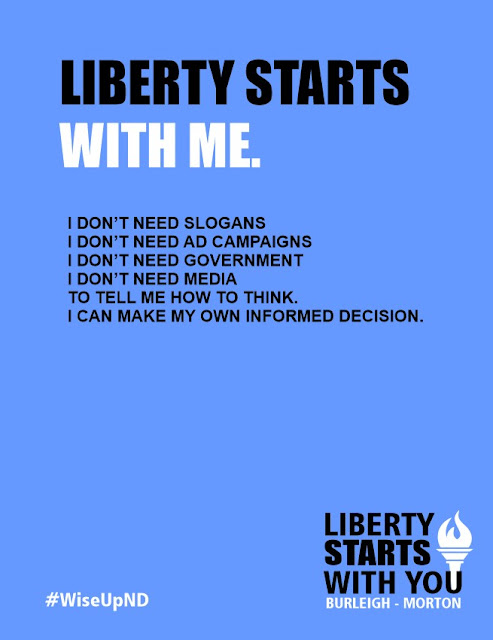