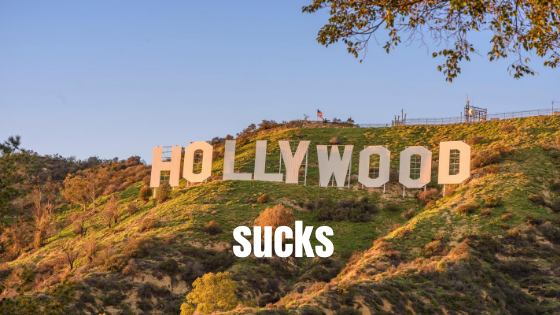 Hollywood is now dictating mask policy across the country because one thing we want from our bodily fluid and sex obsessed sex offender infested entertainment industry is advice on how to cover something to keep from getting a virus.

During the Pandemic, one of the few fun activities not ruined by pandemia hysteria was going to the movie theater.

Once they finally opened up after Gov. Burgum gave them permission to do business in our capitalist society, my friend and I went every week. It wasn't very full, but there were no masses of faceless people wrapped in useless cloth, women with glaring or fearful eyes averted lest they catch Big Rona via eye contact, either.

The theater played a Merrie Melodies episode at the beginning like theaters used to when I was younger. They only had older movies to run, but it was fantastic because these were movies from before Everything Became A Super Hero Sequel 15 Prequel 5 movie. It was back before every movie had to try hard to not be racist genderist or whateverist, where you could toss out great lines and not worry about antifa burning down the producer's house.

Lord of the Rings (extended!), Twister, Ghostbusters, The Hunt For Red October -- it was the best summer for movies I can remember. $5 tickets, and then we'd buy more concessions than normal to try to help out the theater as much as we could. Because I love the Grand.

This was the first weekend I haven't gone to the theater, because I was camping. That is because camping is about the only other activity you can do where people are normal, are having fun, and aren't wearing masks and acting weird, which is why trying to find outdoor or camping gear right now is almost impossible. People who are camping are less worried about Big Rona and more concerned with West Nile. I wasn't thinking about viral load, but more about what that lake slime consisted of.

This weekend, while out of town, the Grand Theater said that they now required a mask.

If they don't mandate a mask, the movie studios won't send them any of the few new releases trickling out to theaters.

Greenland (a.k.a. Armageddon Deep Impact But For 2020 Because What We Need This Year Is A Disaster Movie!).

Unhinged (which is what this whole country is becoming at this point).

Never mind that the fearful people probably haven't the intention of going to a movie theater anyway, and that the non-maskers were the most likely ones to not be worried to go to a place where a guy three rows back could cough on your popcorn. (With the new rules, he still can, as long as you're both eating. Because Rona knows that if you're eating it can't transmit.)

The theater is already down 80 percent. So here comes Hollywood to kick them in the groin because there wasn't enough arbitrary pointless rules and weeping this year. "You will force your customers to wear masks or we won't send you our new releases even though we know we've screwed you all year and you're about to go under."

Consider that the movie studios love you so much that they released Mulan on a proprietary streaming platform that you have to sign up for and then, to see the film, pay $30. Yeah, movie studios are friends of the people for sure. They love their customers so much that while they are in a bloodbath of a year financially, they'll find a way to pull some blood out of you and the local theater to stay alive. They love you so much that they are falling all over themselves to have genderless characters with names like Pat and Parker.

I messaged the local theater. I told them all of this. I said I was disappointed. They were really polite but the reality is that if they don't force everyone to wear masks, they get no new movies and will go out of business. I understand their quandary.

The other theater in town already went out of business this year.

Essentially, Hollywood has found a way to mandate what the people living in states outside of California must do in terms of health policy. Because California is known for logical and sensical policy on all kinds of things, policy that will really apply to North Dakota super well.

I am continually disgusted at how unelected corporate America is finding ways to dictate social policy this way. Here's Hollywood, saying that if we want to eat their current modern slop in a theater, we have to mask up. Otherwise we can screw over the local theater and pay to see it streaming online in which Hollywood still gets theirs, but theater owners are put out of business. Everything about it stinks. Any movie theater association that has been taking membership dues and isn't mounting a lawsuit against Hollywood movie studios over this is not worth being a part of because they don't fight for you.

I realize the theater is in a hard place, but I will NOT wear a mask. I think my blog readers know that. No, not even the NDDOT billboards along the interstate with #MaskUpND will change my mind, Dear Leader Burgum, because I will continue to drive on my jolly way to see friends and family at a crowded campground where we'll hug and laugh and sit around a campfire and make s'mores and not use hand sanitizer one bit, and not wonder what Mandate Molly and Krazy Karen have to say on the latest Facebook post on the ND Health Department page.

In my first book, I wrote an essay about the Grand, because I love going there. Below is an excerpt from that essay. I still love the place, but I won't go there until there is no mask mandate. That'll either be right after the election or when Hollywood spontaneously bursts into flame after being struck by a remake of a remake of a remake comet, and we're all better off.

For Egyptian History Buffs, Go No Further Than The Grand

The ancient Egyptians had no idea that their significant contributions to art, writing, and architecture would have become so handy for the movie-going public.

When you visit the Grand Theaters in Bismarck, North Dakota, you can choose from about 4000 different screens and see a kind of facsimile of the palette of Narmer in the women's restroom. As you make your way to the concession stand, which takes up a significant portion of the lobby, you can replicate the awe of standing in a hypostyle hall, with columns that rival the great hall of Karnak.

As you wait for your film's specific theater to become available in the general melee of the highly disorganized lobby, inching ever closer to the mildly terrified teenager who has to holler out which movie is now seating, you can enjoy a delicately lit fountain which has an upright Anubis looking on. Anubis, associated with mummification and other death-related unpleasantries, serves as a stern reminder of how capitalism works lest you consider sneaking into a movie without paying.

Depending upon which theater you find yourself in will determine the level of Egyptology you will experience. Some theaters are Baroque or Art Deco or a kind of McDonald’s circus-style of primary colors, while others feature floor-to-near-ceiling male support figures, a kind of gold-painted pharaonic Atlas. You may also find purple and blue lighted columns against theater walls, both papyriform and tent pole columns, complete with hieroglyphics.

If you are fortunate enough in your choice of exit from the theater, you may get a chance to walk by the life-like figure of Charlton Heston as Moses, regally holding the Ten Commandments with a small pool of water at his feet, sprinkled with coins and subsequent wishes. Like Anubis, the suggestion of "thou shalt not steal" is another reminder to stop sneaking into theaters without paying for a ticket. While I have always found this perpetually staring version of Heston Moses a bit unsettling, I've never fully feared him. Even if he were to suddenly receive the breath of life and become animated, I believe he is too preoccupied with the commandments to do any real damage and he would surely be confused that he is back in Egypt after all of these years.

While walking down the hallway, you might be like me and imagine terrible things that involving an ancient dread reviving inanimate objects. Namely, the vintage movie posters on the wall. Bogart and Chewbacca and John Wayne and the Alien--even in a best-case scenario, it's going to slow down your ability to get to your car and make your dinner reservation on time.

Of all the gin joints in all the towns in all the world, Anubis had to walk into this one.