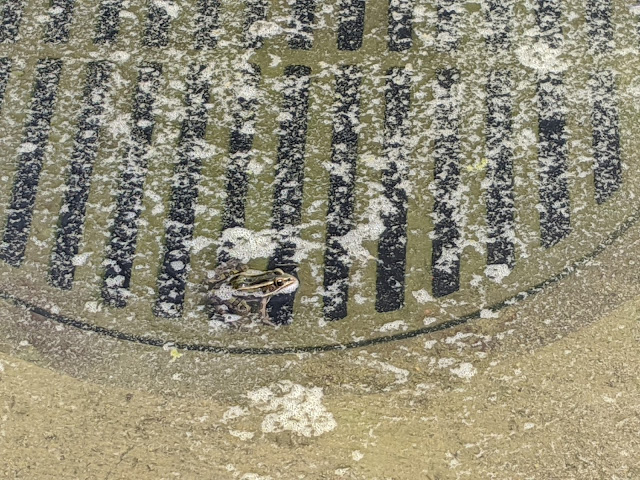 This past weekend we went camping here in North Dakota.

It's one of the few things you can do without too much abnormality involved. Just about any other activity forces you to run up against all of the "safety" mandates and requests and coericions this pandemic has brought.

To get there, we had to drive past several #MaskUpND digital billboards put up by our state's Chief Nanny Officer. God forbid you go anywhere and enjoy life and miss seeing a sign telling you to cover your face, stand apart, don't shake hands, and stay home if sick. That someone thinks this is doing their good duty is violently wrong.

Campers, fires, s'mores, boats, lake algae, mosquitoes, sweat, bug spray, sunburn, flip flops, smoke. Once we got there, all of that covid pandemia crap was forgotten as it should be.

Chasing the kids on the paths through the trees. Hugging family. Boat rides. Sneezing from pollen without feeling you have to have a lawyer present. Ice cream from the camp store. Talking about things remembered in the flickering firelight. Talking about what's happening in the world, trying to be tough, but the anger and weariness of it all seeping through.

Parents, tired of other fearful fretting parents and school boards and teachers and systems that are supposed to educate their kids, but have blossomed into the fruit tree of unions and fear and refusal instead, leaving kids confused and sad and isolated behind screens. Colleges using gift cards and money to bribe healthy asymptomatic incoming college students to get tested for a less-than-deadly virus, causing numbers to spike to create meaningless case numbers that reinforce more anxiety in the fearful and encourage corporations to continue to lock down. Battles in families and communities over those who want to live freely and those who say they are selfish, all symbolized in masks using subtle jabs. Online battles growing heated leading up to another awful election with results that will probably lead to more riots no matter what. Family and friends from far off arguing over things they don't understand locally. Government officials using extremely destrutive emotional methods to control behavior while gaslighting those protesting that approach. Churches not preaching the Bible or talking about what Jesus said would happen towards the end, instead continuing with sermonettes and special music and hip light shows and coffee shops and programs and social justice.

Fighting over flotsam and jetsam while drowning, basically.

On the second night of camping, as I left the shower house with flashlight in hand, I could see a large frog on the sidewalk. It tried to jump away from me but in doing so would jump slightly to the side and bang into the brick wall. Over and over it did this, making barely any forward progress. Most of its energy was spent bouncing off the brick wall. It went nowhere. It was fighting a brick wall.

I almost started to cry, watching that frog.

What a pointless expenditure of energy.

I am so tired.

There are probably others who could say the same.

The internet, the government, the news media, the corporations, Hollywood, fearful friends and family and church members constantly poking and insisting -- they have all helped wear me down.

Some of that you can shut off, but some of it you can't because it is forced into your face when you try to buy food or do anything outside of your house.

I can't bear the weight of all of the fears of someone else who tries to get quell of that fear by controlling other people through shame and guilt and destructive cajoling. I can't put up with the politicians gaming the year to do whatever it takes to get elected when I've had enough of games from celebrities and corporations and governmental organizations. I can't handle another government check or bailout or program or executive order or set of emergency rules or place that takes freedoms and names and phone numbers and has guards to keep me out if my head isn't swaddled for my safety.

Back in the camper, I got to talking about it.

"There was this frog," I said, and then tried to describe that moment when you realize that for months you've been praying and chugging along, hanging on, fighting to find income, juggling the work, holding to your principles, changing habits, trying to find the joy, feeling pretty solid and then you see a frog banging its head against the wall and you realize how thin a thread it all really is and you see yourself in a frog and the tipping over begins.

"I don't want any more people sending me messages, arguing with me, correcting me, asking me, telling me how to be safe and right--nothing. I'm tired," I said.

The crickets, the buzzing insects in the trees, the stars I saw when I had to walk to the restrooms at 2 a.m. with a flashlight in hand, the fog hovered over the campground, the howling coyotes in the distance -- that was good. It was real where it matters.

But that's not where I live.

I have to go back to the stupid capital city of the state where the governor and his entourage, and the like-minded citizenry, are in a full court press to crush spirits with a smile as they pour the kool aid down your throat, where I'll do most of my work behind a screen where dings and beeps from all kinds of messaging apps will inform me that somebody somewhere disagrees or thinks I need to know about something or has a deadline.

On the way back to Bismarck from camping yesterday, I listened to two different sermons.

They both, amazingly, covered Ecclesiastes.

If ever there was a year where Ecclesiastes became so real, where you could see that there's nothing new under the sun and everything is meaningless and a chasing after the wind, except God, it would be this year.

At least there's one more camping trip scheduled for the year.

I hope the fearful and the government don't find a way to ruin it for me for my safety.