Are seatbelt laws the same as mask mandates? 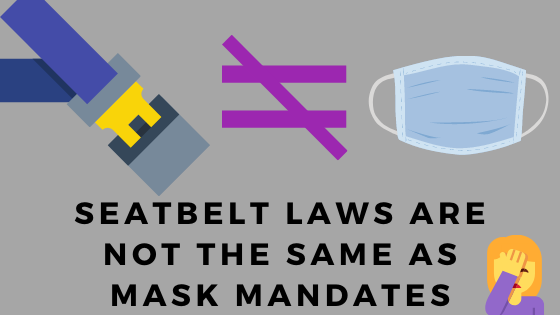 I'm not sure how this even became a question, but after some absence on social media, I popped back on to find everyone arguing this issue. Some leader somewhere must have tried to say they were the same in an effort to quell opposition to mask mandates.

Click-it or ticket vs. Mask-it or casket.

It's not enough that I am hearing growing stories (including a medical professional talking about an eight-year-old girl who committed suicide) of children unable to process these mind-screwing coercive messages that have filled the year, but every day we seem to get some logical fallacy dumped on social media to easily confuse people.

One gal, in one of my private freedom groups on Facebook, said it best in regards to the seatbelt-face mask comparison:

You don't wear your seatbelt when your car is parked in the driveway because you're not moving, so you don't wear a face mask if you're healthy and asymptomatic.

In other words, we don't have laws that require you to wear your seatbelt every time you get in the car, even if you're just sitting in the parking lot listening to the radio waiting for someone to come out of the store. Our laws apply only to when the car is moving. In like manner, mask mandates should only apply to those who are actually symptomatic and sick.

"Do you wear your seatbelt, Julie?"

I wear my seatbelt. I've worn it my whole life. Most of my family does.

"Why do you wear your seatbelt, Julie?"

Because there's a lot of evidence gathered over many years that show that in many common accidents (e.g. rollovers) seatbelts really do save lives by keeping people from being thrown from the car. Rarely (though it does happen) does a seatbelt contribute to death. So, based on that information, I'll wear one.

But not everyone makes that choice.

Because there's a lot of evidence that shows masks can cause other real (and sometimes serious) health side effects, there's not a lot of evidence that proves (the difference between conclusion and correlation) they reduce infection rates for respiratory illness, and there is definitely not strong evidence that they should be worn by healthy asymptomatic people since we really don't know that people without symptoms are spreading viruses.

If you'd like to argue that point, please watch the video below of Dr. Fauci and what he said during the last respiratory viral outbreak/pandemic:

Key takeaway from that video: people who do not have symptoms are not a threat for spread. If that is true (and of course, Fauci only speaks truth, right people?), all of this nonsense regarding masks for everyone everywhere should be tossed in the garbage. Healthy people are like folks sitting in parked cars; they don't need to wear their seatbelt or their mask.

If you are sick, stay home. End of story.

If it comes down to all or nothing, get rid of the seatbelt laws.

The default setting for every American should be freedom, and if there's any question or snag, any leader who decides to continue melting the emotions and minds of the citizenry with confusing and shoddy logic, we should default to more freedom and not more laws. Get rid of offending laws that are used as an attempted proof for such things as mask mandates.

The balance between law and order, and liberty, is very fine. There's give and take. There's personal responsibility and risk acceptance for each individual (not the mob, but the individual). There's some overlap. But if one law (most often applied to mob for the "mob's safety" at the expense of the individual) seems to be leading to a loss of liberty in unintended entaglement, then get rid of it or revamp it.

If you keep using the seatbelt law example to justify mask mandates, I'm going to start pushing for an end to seatbelt laws.

This would be the law of unintended consequences, dear leaders. You can pile lots of laws in the basket until suddenly you pile just one too many and we go after the whole basket. Brace yourself. Because what other safety laws can we pull down once we start down this shaky path of illogical persuasion?