That's a lot of metaphor ya got there. 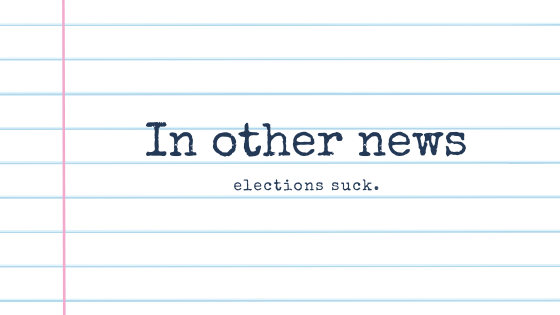 A friend shared an article from a newspaper from back home, a newspaper I used to work for years ago in which I would write stories about prize bulls and the state barley show.

Ever try to write about the state barley show, over in Osnabrock, North Dakota? There are not a lot of story hooks.

It's basically pans of barley and farmers listening to extension speakers and eating sandwiches. But you have to write legitimate information about what's going on. That's the gig.

I guess the gal who wrote the article my friend shared with me works as an editor or reporter at the newspaper, and is running for a seat for her district. It's tough when you want to use your newspaper to help your election bid but kind of don't want to run afoul of election laws.

I mean, it doesn't help the reader. It just helps with election law sketchiness.

The clipping in question was an editorial opinion column the hopeful candidate was trying to write as if she were a philosophical unbiased observer of the election experience.

"I'm having a hard time following what she's saying," the friend said.

I love a good obfuscation, so I took a read.

Five minutes later, I responded to my friend. "That's a lot of metaphor and literary reference to say elections suck. A guy could probably just write: elections suck."

"Elections suck. In other news, the barley crop this year was decent." (I don't know if it was. I haven't been to Osnabrock in years.)

Purposefully mysterious and vague social media posting skills have given younger generations the ability to allude to things with a kind of ham-handedness that doesn't exactly state anything overtly but lets you know that they might need sympathy, compliments, or an obligatory "you go girl."

"People that walk all over you don't deserve to be in your life!" you might read, and wonder if there was a bad breakup, job incident, someone stumbled upon a book of quotes, a nasty trip-and-fall, or what.

The wink-wink vagueness of this approach inserted into a multi-column editorial doesn't do the reader any good. It's the simple art of murdering your reader, but instead of with purple prose, it's an attempt to tell an inside joke ("wink wink I'm running for office!") assuming enough people will get it and won't mind that they paid a subscription fee to read it.

If you want to write for some arthouse rag, it's probably OK to wax eloquently for several paragraphs from Shakespeare, the Bible, Las Vegas, a Yoda-esque repeat of an immediately preceding sentence and never land on your point so your reader isn't sure what to think except he or she is stupid, like this article did.

But you know, if it's a local newspaper, maybe get to the point.