With North Dakota Governor Burgum's latest executive order because of what appears to be his eternal and never-ending state of emergency powers, the ability of the state health department officer to enforce quarantine orders on people has been extended.

Previously, if someone in your household tested positive, the whole bunch of you were locked in tight for two weeks*. Now that's been extended to the vaguely understood "close contact." So, if you're around someone within six feet for 15 minutes or more who then tests positive, you won't be working or leaving your house for two weeks. (No special allowance for you if you were wearing a mask, so I guess they...don't make a difference?)

No big deal for white collar workers, maybe, but not so great for a lot of others.

This, for a virus with 99 percent survival across nearly all demographics (it's past the decimal point where there are changes). 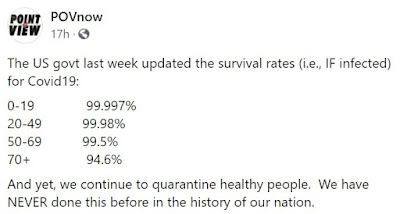 This for a virus in which a recent NYT article said that only about 10 percent of positive tests actually reflected a viral load that could infect anyone else. Our own governor said only one in three could infect others (no idea where that number came from) in the press conference where he announced these neat new enforcment powers for public health to lock up healthy people. (Of course, he was quick to wrap that up in guilt that you could be killing people left and right since you don't know if you're part of that one third and should therefore assume you are, because that's what good leaders do is make people feel fear and guilt as a kind of pre-crimes Minority Report approach to viruses, and that two-thirds should definitly be locked up because of one-third potentials since that's a really great approach to freedom. Let's assume we're all viral murders! Err on the side of that, instead of on the side of freedom! Whatever.)

If you happen to be on someone's close contact list, you'll either quarantine or you could be fined $1500 and spend some time in the gray bar hotel for a month.

Here's where we get to the divided state.

I'm not talking political parties or any of the obvious at this point. I'm talking about the division between those who are buying into all of this, and those who aren't. Because two weeks' worth of income is on the line, as well as your freedom as a non-sick person to live your life.

To be clear, I'm not talking about those who are symptomatic and sick. That's a given that you stay home. But this is about people who have zero symptoms who are being told to quarantine. Healthy people.

We don't quarantine non-sick (i.e. asymptomatic) people. It's insanity and stupid to do so. Trying to contact trace a respiratory virus like we're doing is crazy. This isn't Ebola, with it's 30-50 percent fatality rate we're talking about. This is very similar, in numbers, to the flu. With this specific virus and what we've come to learn, the current approach doesn't make sense at this time.

What I'm saying there, just in case it's lost on anyone, is this: in light of the data on this particular virus, I (and others) have deemed the response to be excessive and an overreach and, in some cases, unconstitutional. We're dropping atomic bombs on ants right now. If it were another virus like Ebola, I would do the same thing, which is look at the data and make wise decisions and, because that virus is a real meat grinder, would take different action. We would shoot atomic bombs at asteroids in that case. I would see no inconsistency in my behavior and response, because it's based on the same consistent approach: risk appraisal and subsequent decisions.

That's the tricky bit, with all of the "butwhatabout" people online trying to use other viruses and such as a proof point. They think they see inconsistent behavior in people like me, but they don't undestand the foundation of the action is based on a very consistent approach: what is the risk based on the data, and what actions make sense with that in mind?

In case you think this is Ebola, right now, as of September 24, 2020, peaches and onions are topping the CDC outbreaks list (yes, OUTBREAK, not pandemic):

That's a list based on date, to be sure, but do most people even realize this is no longer considered a pandemic? Are they in a tizzy about peaches and onions and salads and puppies?

In light of that, that this virus isn't as deadly as we thought and is now an outbreak due to the low death numbers and other factors, as shown by this screen grab from the CDC website, do what you can to stay out of the contact tracing quarantining overreach of the government.

So here's what you will have to do if you don't want to be taken out for two weeks when you're not sick.

1. Stop getting tested if you're not sick. If you don't have symptoms, you don't get tested. I know some of you are forced to by your employer. That's a whole other battle. You don't get tested for strep throat when you don't have the symptoms, so why would you get tested for this if you have no symptoms? I have a video of Fauci, during a previous pandemic, saying asymptomatic spread has never been a huge concern/driver for respiratory pandemics and outbreaks. I can't share it on Facebook easily, because it gets pulled. But I have it. If you want it, email me.

2. Actively stop allowing them to track you. Don't take your phone with you, and/or turn off location services when you're out and about. I guess I'll go back to putting it on airplane mode and in a little Faraday bag I have.

3. Don't rat people out. Not only should you not be reporting neighbors and others for "infractions" made by little dictators, you should "forget" who you've been around if you've never been symptomatic. Stop giving out names. Heck, so many are wearing masks I just can't tell you who I've been around anymore because I don't see their faces, ha. I could forsee me wearing a "mask" in the future for the simple reason of making it so people didn't know who I was.

4. Don't pick up the phone if you don't recognize the number. Don't take a call from the DOH. Known numbers only.

5. Choose your aquaintances carefully. This is where the unfortunate division is going to come in, and it won't perfectly follow political, religious, or other lines. Avoid being around people likely to be actively buying into the testing-contact tracing-lockdown-quarantine rigamarole. It's awful to say that, but they have the potential to shut down your life for at least two weeks, and that will cost some of you the ability to work and have an impact on your income. They're eagerly embracing this and by being around them, you'll be on their contact list for quarantine. They think they're doing good, and being helpful. Being around them puts your freedom at jeopardy.

Sorry, but those quick and willing to comply with whatever the government tells them to do, whether family or friend, have no qualms about pulling you into the mess. Avoid them. Be nice. Be polite. Heck, they probably make it easy because they don't want to be around people. But be aware of who will happily provide your name to governing agencies. Limit what they can see on social media regarding your freedom-loving activities. I have restricted my friends list and many folks can only see what I post publicly for this reason.

Yes, we've come to that in just six months.

UPDATE: By the evening of Sept 24, it sounded as if pressure from people, including North Dakota legislators, would cause Bugum  to rescind this order. By Sept 25, the order was rescinded. GOOD. Don't do stupid crap like that again. 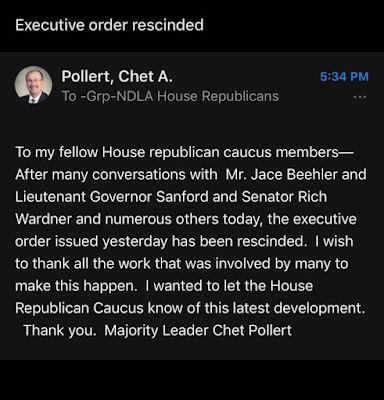 * Here's what I've learned from several real-life incidents here in the state: If someone in your household was around someone else with a postive test, they would be quarantined but the whole household wouldn't. And the quarantined individual wouldn't be required to get a test, which you would think they would want in case they were positive so they could lock down that household. So we can see this contact tracing is an absolute joke, especially for a respiratory virus.