Will the fearful be the new pariah? 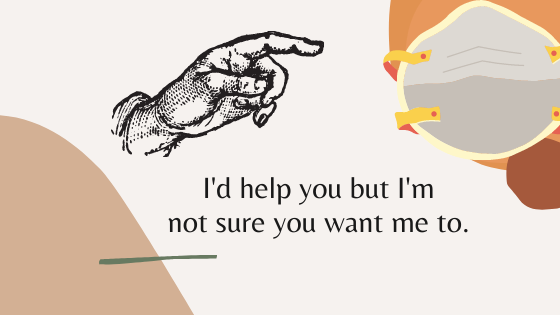 This year, by simply refusing to wear a mask, I've often felt like a pariah.

Online I've been called a murderer, selfish, not doing my part, stupid, and more. Some stores have refused me entry. Other stores have allowed me in while letting me know they kind of wish I wouldn't come in. I've had people wearing masks glare and go out of their way to be strange around me. Other people I know have actually been confronted and humilated in the store, all here in North Dakota.

Will the fearful be the new pariah?

I kind of doubt the fearful will ever be the new pariah, because fearful people are choice for marketing things to. People who are afraid are easy to convince to buy things, do things, inject things, hide from things, march for things, identify with things -- if you have something to sell, you can package it with fear and you'll be rich.

But imagine a scenario, for a moment.

I was in Medora this past weekend. A few mask wearers, but not many. The Medora Musical and the campground felt fairly normal. What got me was when I went to a bar and grill there for supper before the musical, and the sign on the door which basically said, with a bit nicer wording: if you're concerned about Covid, you probably shouldn't come in.

That should be the approach.

Instead of bringing everyone down to a level that accomodates the most fearful or the most dictatorial, simply say "if you're afraid, you probably shouldn't be here." For months I have seen an almost gleeful "you anti-maskers who won't comply with a store just go somewhere else." Now I wonder if we'll start seeing an opposing response that kindly says "you who are fearful, you may just want to go somewhere else." I watched several groups of people come in to that restaurant, full mask, aghast at what they saw before turning around and leaving.

They can still get takeout and pickup. But instead of those of us who don't want to wear a mask or don't want to live in fear who don't want chemicals dousing everything being relegated to the back of the room and not allowed to come in--a kind of "get your stuff out there away from us" approach which made different classes out of citizens--what if it were flipped and those afraid to be around people were the ones who had that path? Wouldn't that be the best option? Herd immunity built on the backs of those willing to be in the running for it.

We simply can't go on like this, our current way of living.

At some point we have to start heading the other direction and those who have become, for six months, used to being promised "safety" and accomodation by making demands of others, used to the listing of what's being done to keep them "healthy" (distance, disinfectant, masks, etc) will have to either emerge from fear or start being the group that won't be welcome in the places inching back towards normalcy. I don't want people to feel unwelcome (though that's been an experience for me this year many times over) but at some point they will have to remove their mask and not have hand sanitizer everywhere. They will have to start living again.

The pariah is the untouchable, but I tell you, you who have been living in fear for six months and have normalized the truly unhuman and bizarre behavior and beliefs about life that have come along with it, you will be the untouchable. Because you won't allow yourself to be touched.

As we were leaving the Medora Musical, a woman came up the stairs her hands packed full of blankets, bottles, and bags. She had a mask on. A bottle dropped and I could see that she was kind of stuck as she realized she had no place to put down the pile of stuff in her hands, and no way to get the bottle. She had no free hands.

My natural inclination would be to go over and help her. But I paused. Why?

Because I wasn't wearing a mask.

She was, I wasn't. If a person is wearing a mask when they aren't required to, I have begun to naturally assume something about them, about who they want near them. I can't help you if I have to stay six feet away from you and not touch anything.

People have become strange and don't want others to approach or to touch their stuff. For some, I'm not a potential source of help, but a potential disease vector now. I don't know if I'm allowed to help, if it will make them afraid or angry or confrontational. I don't have a plastic barrier, a bottle of chemical to spritz about.

You might say that's an unfair assumption about the woman, and you'd probably be right, but based on what I've seen people express online and some other things I've experienced or people have shared in a private group on such matters, I no longer know. There are people who make the following signs out there, encouraged by our "public health" and government officials to think like this.

So that woman stood there, on the stairs, not sure what to set down in order to pick the bottle up.

My friend paused at first, too, both of us frozen, mask free, looking at the woman. My friend made the first move to go help.

This angers me. I normally would rush over and help. My natural inclination is to look at people and smile.

But people in masks don't even LOOK at me anymore.

Maybe they're angry. Maybe they're afraid. I don't know what it is, but they've adopted an almost different body language, one that's furtive, eyes darting, perhaps always planning the six-foot distance grid on the floor. You're in for a penny, you're in for a pound. You've been social distancing and isolating and sanitizing and now masking for so long, the climb back out is a long, long way. People breathing, smiling, near you, wanting to hug you -- this is some kind of terrorism to them.

The health effect of fear and the accompanying stress hormones mixed with the disinfectants will be difficult to measure, particularly since we're not testing for that, but at some point we must stop wearing masks. Stores must stop mandating them. At some point.

When is that point?

Will people who weren't swayed by a very low mortality rate or who dismiss news reports of false positives and questionable test results from a questionable test believe a big box store when it says it's OK to not wear a mask anymore? You who wear a mask and religiously follow all of the rest: what statistic, what data point, what date, what cut-off point, what moment is it that you'll wake up and realize you can put the mask away now? Is it when the government tells you it's OK? When CNN says it's OK? After the election? When a magic vaccine fixes everything even though flu vaccines are a notorious crap shoot? Will there be a day when the news is broadcast across the country "it's safe to take your mask off now"?

When will you become the pariah because you never defined the moment?

Right now, I'm living as absolutely the same as I had been (which, incidentally, was always with good hand washing, covering my mouth/nose when I cough and sneeze, and staying home if I get sick which I rarely do). Like many others, I'm already living beyond that point of return to normalcy that I'm guessing some haven't even stopped to consider and define.