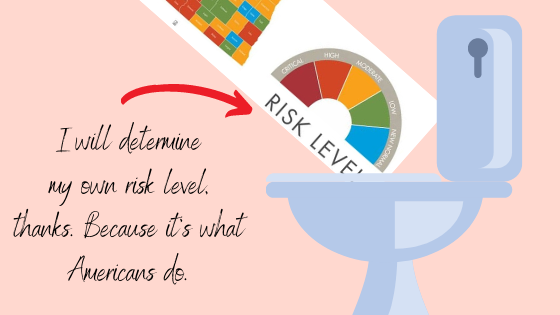 Imagine, if you will, a scenario where we could do everything to the nth degree that our Dear Leader Burgum and Comrade Public Health Officials wanted.

Each person would have severly limited and reduced contact with each other. People would have their temperature taken multiple times. At least one mask would be worn at all times, and in some cases, there would be additional masks or face shields over that. Constant testing of each person would be the norm.

Surely then we would stop the virus, right?!?!?

Wear your mask! Reduce capacity! Restrict activity! Take temperatures! Test all the time over and over every day!

If only we had such an example of this so we could know for sure how successfull it would be!

And guess what? After all of the extreme restriction and protocol...the virus still gets in. Our state death numbers are significantly associated with our many facilities of this nature. This is literally what I wrote about a few months ago, the "Red Masque of Death" approach which thinks that with enough barriers and restictions and blockades, you can keep a virus out.

Pediatricians make the city newspapers saying they're pleading and ready to beg the governor to mandate masks! Oh the heartbreak! Funny, isn't it, that I hardly see anyone without a mask out and about since August and...our numbers still keep climbing. Hmmm.

Kim Jong Doug recently changed colors on many folks in counties across the state, bumping them up to one away from "we're shuttin' you capitalist non-essential suckers down for your own safety" status. A whole bunch went up to Terror Level Orange, which is one away from You Naughty Kids Get a Spanking Red. Now he and his goosestepping mayor buddies are going to use that red level as a threat, it sounds like. "If you folks don't comply, we'll enforce shutdowns again!"

Hey, sole proprietors, now that there is no more unemployement for the self-employed, how does that make you feel if your governor decides slap you with "non-essential" status again? Ready to lose your business while your gubmint keeps you "safe?" While your wealthy governor noodles around with the elite while crying at a press conference to convince you he cares?

(P.S. In 2016, I didn't vote for Doug Burgum. I was pretty sure something was off about the guy. Guess I wasn't so stupid. Once again, I won't be voting for him.)

I think of how Bismarck Mayor Bakken ran against former mayor Mike Seminary as if he were some freedom-loving for-the-people guy. And now here we are, with the mayoral letter above, previous strong-arming, and crap like this everywhere: 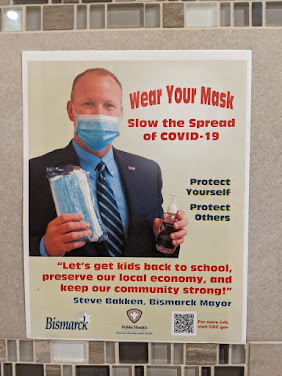 At first I felt sorry, knowing he must be really getting the pressure put on. But at this point, after watching/attending several city meetings, and reading the letters he's putting out, I suspect that the guy who ran for the people just dumped the plebes in favor of being welcome at the popular kids' table.  I have yet to hear the filthy word "liberty" fall out of his mouth during this time. Don't you love it when someone runs for office on all kinds of promises of change and once he gets in there, succumbs to the tasty dishes of power and connection?

Maybe next time Bakken runs for election, we'll see some new PAC money and endorsements on postcards promoting him, just like we saw this year from Burgum's My Way Or The Highway PAC.

When push came to shove this year, too many of our leaders took a knee and instead of understanding that the DEFAULT STATE OF THE AMERICAN CITIZEN SHOULD BE FREEDOM AND LIBERTY, they took to propaganda, cajoling, threatening, coercion, fretting about liability and undue enforcement burdens, and in all ways castrating themselves as they found sneaky ways to take away liberty and the basic simple NOT HARD TO UNDERSTAND right to earn a living at your own business!

IT WAS NEVER THE GOVERNMENT'S JOB TO STOP A VIRUS BECAUSE NO ONE CAN. It runs through the population and burns itself out.

How do we know this?

Read the opening paragraphs of this story. Read the truth about masks and how they have zero impact on cases. The viral curve has shown up everywhere, no matter what attempts were made. Period.

1. Contact your county sheriff to see if they are going to enforce any of this stupid gubenatorial dictatorial never-ending emergency powers nonsense. Make it known on social media what answer you hear. From now on, when voting for sheriff, you make sure you know if they're a Constitutional sheriff or some lackey.

2. Contact your state representation and ask when the heck they are going to do something about taking Doug Burgum's blasted emergency powers away and rescinding and ending all of the stupid crap he has done this year.

3. Encourage all of the "non-essential" essential businesses to stay open and screw the "ND Smart Restart Fart" guidelines because what our state needs is for them to stay open and employed more than we need them closed and shuttered for good.

4. If your pediatrician is one who signed this letter, find a different one. (Surprise surprise, though, some of these doctors aren't even from North Dakota! Outsiders meddling again!) Carry this list of names around and refuse to use these doctors. 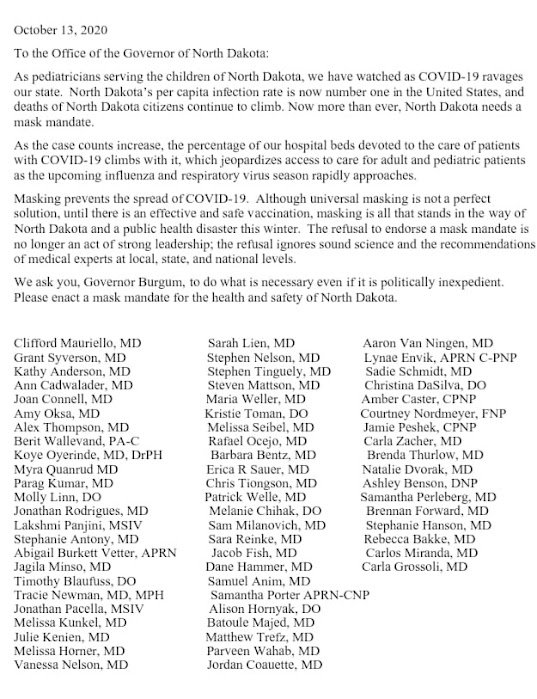 As I drove by yet another gaslighting billboard that stated "Show you care, wear a mask" I turned to my friend.

"Guess what. I don't care anymore," I said. I didn't even care that I didn't care. Meh.

Our wise leaders kept associating caring and empathy with wearing a mask and perfect compliance. I guess they figured that would be the perfect guilt-trigger to get compliance.

You leaders made a lot of citizens tune you out for good. You made a lot of good citizens refuse to cooperate with your stupid contact tracing efforts. You refused to listen to us as we asked you to get kids back in school and stop the propaganda and let us live freely; instead, you insisted that we listen to you, our alleged public servants.

We're done listening to you. Fix the roads and shut up. You work for us.

When I see your billboards and posters, I have but one singular gesture and that's the extent of action your efforts will ever get out of me.

I'm seeing lots of angry people online, at the end of their rope.

You can't push the people in this place in this culture this hard for too long. This is the state of Gordon Kahl, not the Fargo Karens. Quit angering everyone. You can diddle with your numbers and charts and whatever else if you want to, and send hashtag memos back and forth amongst yourselves calling people rednecks and idiots, but let the rest of us choose how to live our lives.

UPDATE Oct 19, 2020: Another place where strict controls were touted as being a successful deterrent was the prison (and attempted as a reason for mask mandates). Guess what?

Mr. Virus still gets in and spreads, despite the controls, because that is what the curve will do. 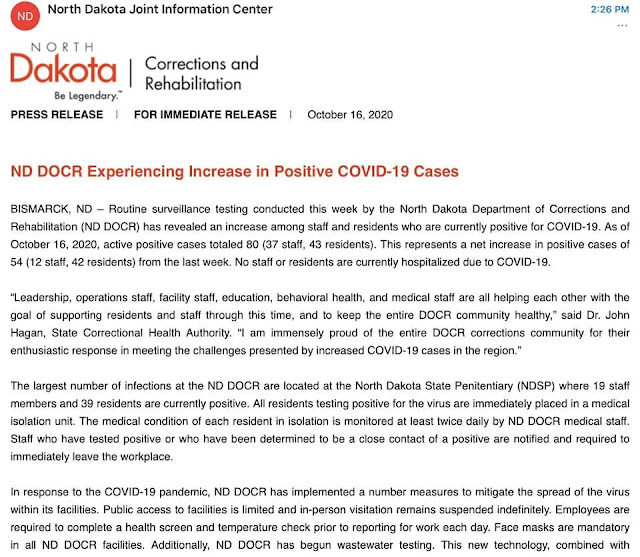