How many steps to Anti-Masker werden hier nicht serviert?

Everyone seems to go to the Nazi comparison sooner or later. That's Godwin's law.

It's pretty annoying we all go to "you Nazi!", because what happend in Europe was complex and a horror that I can't ever quite grasp.

And yet, while I hate to fall into Godwin's Law, sometimes the Nazi Germany comparison has ripples that echo legitimately in other areas of life. There were behaviors or things done by the government, little bits and bobs that got people from point A to a horrifying point Z.

It's those steps that we need to be aware of, because in them we see the use of psychology for the extreme culmination of divide, destroy, brainwash, and reign. It's not unwise to keep an eye out for the small things that are being done that will ultimately culminate in a very big ugly thing, because that is how we got that ugly bit of history in the 1930s and 40s.

Gradually, bit by bit, acclimation by acclimation, you get there. You use grand and glorious words and phrases to package your ideas in, dipping a turd in milk chocolate and wrapping it in gold foil, and you eventually get to the beast.

Somewhere between agreeing to private property rights and also seeing the incongruity in recent years of lawsuits against businesses who wouldn't provide desired service* to various identity groups, I was stuck.

That's how they get you. They tap into what you already know to be right, blur the line, and make it so you can't quite get to why the new thing seems wrong.

To have our state government put out something like this was the end of being stuck. 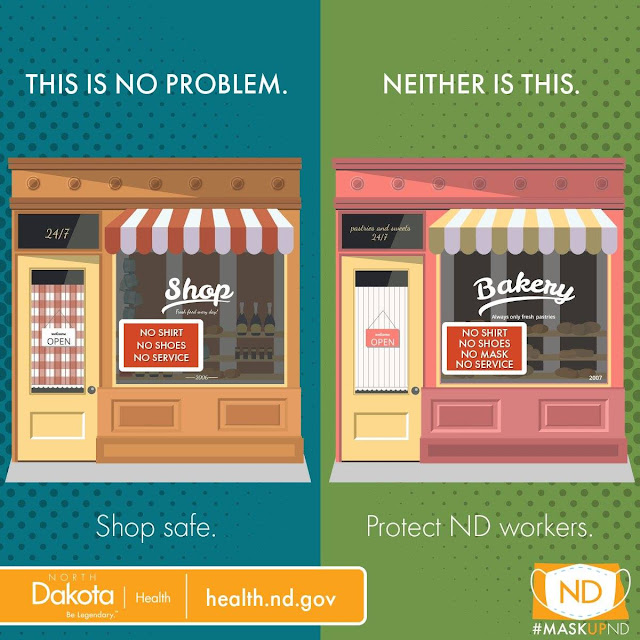 "It's totally fine to refuse to sell goods and services to people who don't wear masks," our state government says. Never mind that not wearing a shirt or shoes isn't exactly the same as not wanting to wear a mask which has some real health concerns associated with it. If I don't wear my shoes, I'm not going to get a bacterial respiratory infection.

A mask is different.

It hides identity, has a psychological impact on those wearing them and around them, and it does affect the health of some negatively.

But the state "health" department insists, doing so using cutesy graphics. It's the same propaganda the world has seen over and over through the ages.

So I made this:

"It's not the same, Julie. That was a religious/ethnic group! They couldn't change who they were! You can put on a mask!"

It's not the same, but it is the same path. 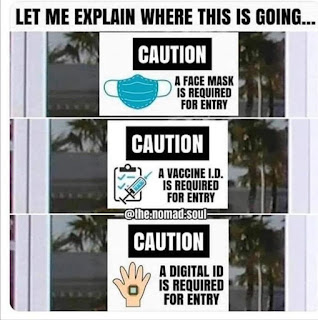 How much more propaganda does it take to get people to be fine with other exclusions?

We're in an era of identity groups, and you've just created one. I've even seen it referenced as such in newspaper articles, the group known as "no-maskers" or "anti-maskers."

It's not a true name, incidently, that anti-masker nonsense. I don't care if others want to wear masks. I simply don't want to be forced to, myself.

Regardless, you are now given government permission to harass, reject, accost, confront, and not sell goods and services to the group known as "anti-maskers."

What next will be OK to use to keep people out of your shop? What other medical devices or markings must (or must not) be worn in order to buy and sell? Now that the state of New York is beginning to ask questions about your guns and gun ownership as part of your electronic health record because they are going to consider guns and gun safety a "health" issue, will we travel that path? No shirt, no shoes, no gun owners, no service? We already made the precedent, didn't we? If it's a "health" issue and to protect people, all other laws and liberty (and logical thinking) are thrown away, it appears.

In the land of the fearful nutless wonders, health issues are the new rule of law.

When the governor determines what are essential businesses, giving them the perk of not being forced to close and lose money as many "non-essential" businesses were, why are they allowed to keep people from their essential goods and services? Somewhere in there, in the determination that safety must be superceded for them while not for others, an acknowledgement was given that people should not be denied what they provide no matter what.

Anyone who has gotten this far without caving on masks must be understood not as some mere idiot who doesn't get the cloth across the face. Clearly there is something larger associated with it, a bigger picture.

The mask is the line in the sand, the visible thing those of use who will not wear them and are fighting against them know to be the trench in front of government overreach and abuse of liberty. You never know when that battle will pop up for you. Maybe it's the EPA mucking about with your farm land. Maybe it's something else. I don't know, but sooner or later, because the nature of a big government is to get bigger, a battle shows up where you're at and you can stand or be consumed. If you're dismissing those of us who haven't complied, just wait.

Your moment is coming.

And since you didn't defend liberty early on, the momentum will be against you. We've just seen an election stolen by blatant, unabashed, documented fraud. You think preserving your freedom is going to get easier? The people you're annoyed with right now, for not wearing a mask, are the ones you may someday be turning to for help. Too late, most likely.

And no, King Doug Burgum's latest state mask edict has changed nothing for me, not in belief nor in practice. I still do not wear a mask when I am out and about. I. Will. Not. Comply.

Because it's about more than just some piece of cloth.

It's the line in the sand. Some may fall. Some may cave. Some may be tired of fighting.

But some of us are not.

*Masterpiece Cake Shop never turned any customer away, and had previously served and provided items for the clients who sued them. They simply said no to a wedding cake because of sincere religious beliefs. They didn't keep them out of the shop or refuse to sell them any other items.