Is North Dakota the festering pit of infection everyone says we are?

North Dakota isn't a festering pit of infection. (Update: You should question the positive test numbers)

But let's look, shall we?

A friend of mine did an excellent job doing something each of us could do: she went to the CDC website and got some numbers instead of letting media headlines tell the story. 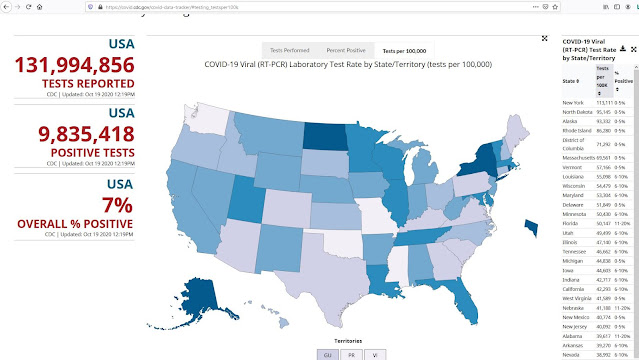 We are second in the nation in the rate at which we're testing based on this map. As in, North Dakota is testing the snot out of people (literally). We have mass testing going on constantly (unfortunately). We are bribing college students to get tested so they're getting tested non-stop to be entered into drawings for prizes or to get gift cards.

We're bribing those kids so much that they run out of tests.

We're testing so much that we can't even contact trace anymore. Shucks. That breaks my heart. 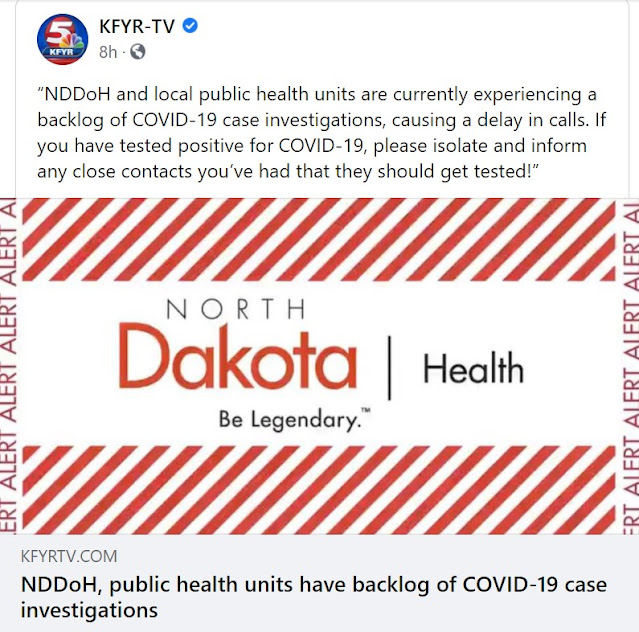 As you know, you can muck about with your rate based on the numbers you use, as well as (in this case) the per capita that gets calculated depending on if it's a per capita rate. The rate is a kind of arbitrary number, in a way. On the most basic level, if you do fewer tests, your testing rate obviously changes but so might positivity rate (which we'll get to in a bit). You can also change how you calculate the rate based on what window you use as your total, and so on.

Rate is somewhat arbitrary. You'll hear this in some of Burgum and Sanford's comments as they point out how high the testing is, and so on. It's a numbers game. They know it.

So here's North Dakota and New York, two very different states. North Dakota almost has 800,000 people, and New York has that many in a bus driving around somewhere in Brooklyn. And we have very similar testing rates. No small thing. 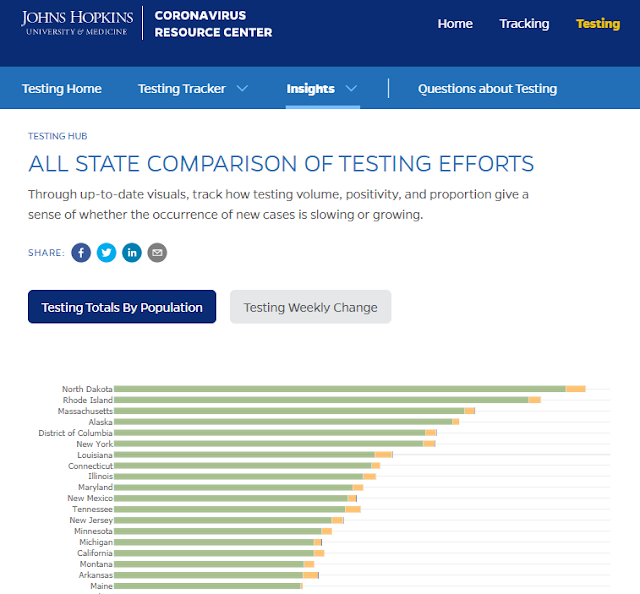 The green is tests per 100K people. The yellow is positives per 100K. Look who is the top testing state? It's North Dakota.

North Dakota is right up at the top for tests.

The "our positive rates aren't that bad" map. 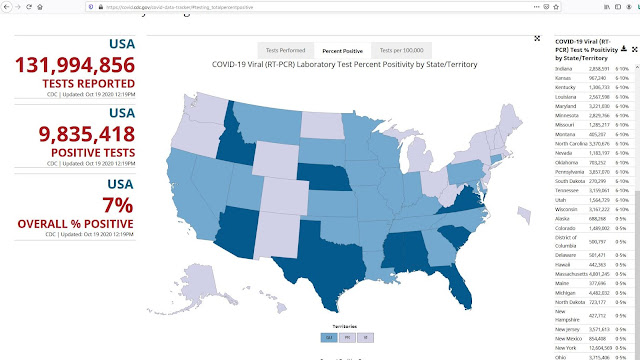 Our testing rate is second only to New York based on the first CDC map, but our positivity rate puts us in...(I mean, you'd think it's pretty bad because the New York Times and everyone is telling you we're walking in viral death sludge here in North Dakota)...41st place.

Despite having a testing rate that almost tops the list, despite actively looking for infection, despite an older population, despite lots of assisted living homes (which is where most of our deaths seem to stem from), we have a positivity rate that's down towards the bottom.

It all fluctuates, since, like fashion and ideology and culture, everything makes its way late to fly-over country after setting in heavy on the coasts. But today, that's where we stand.

And yet, you probably didn't realize that because of the fearful information put out by media and our own state health department, people are clamoring for mask mandates and ripping each other apart online.

There's plenty of other data in these graphics and over on the CDC site, but you really need to think about the numbers. The amount of maps and data arranged in different ways makes it difficult to assess what you are seeing. You just see dark colors on the map and are inspired to panic.

Statistics and data are tricky. You can use the same data to prove just about anything, if you wanted to. Even Bill Gates, our governor's good buddy, knows that. 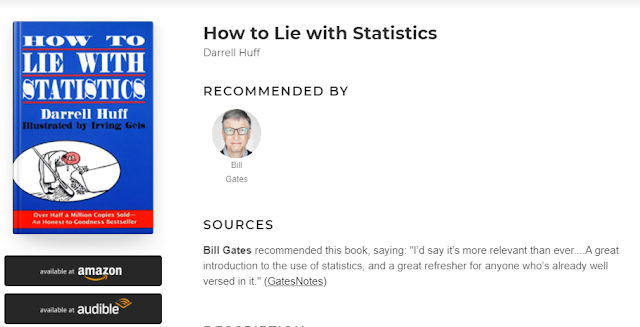 When you look at a number presented to you as huge and abnormal as a reason for fear, compliance, and mandates, ask: what is normal?

For example, 200,000 sounds like a lot, but what other things kill about that many people in a year? How many of those were likely to have died this year anway due to age and illness? This sounds crass, because every life matters and if it's someone you loved they very, very much mattered, but when we are making policy and decisions based on rates and numbers, we have to think in those terms across the board. You can't use rates and numbers to make policy and then, when confronted with data that conflicts or argues strongly against them, turn to the human empathy element.

So much data presented in so many different ways using different calculations, and then some reporter churns it through their editor's talking points machine and out comes a terrifying piece which gets picked up by the lesser media as a filler without much verification and pretty soon you have North Dakota mayors putting in mask mandates a couple of weeks before the election.

And oh, about that, for the peanut gallery...

"Julie, if we had more mask  mandates and controls, things would get better!"

No. Assisted living and the prison system, two very controlled and restricted sandboxes, are seeing a rise in cases despite all of their masking, PPE, and requirements. Again, the science is NOT settled with masks, it's quite the opposite, and as clearly stated, there's a lot that says masks have no impact on the case rates (click the link, skip the words if reading is too much, and look at the graphs and pictures).

And be clear: the majority of people in the state are wearing masks, even if some little twit online says no one is and that's why we need a mandate. You can look it up here. You can see the mask wearing increase as positive cases increase. Shouldn't case positives go down as mask wearing goes up? It doesn't.

Also, if your child is wearing a mask to school and still gets a cold (a.k.a. a coronavirus) the mask didn't work.

"But Julie, the hospitals are filling up!"

First, they are pretty full, but is it all from the virus or is it from the backlog of people who didn't get procedures done? Additionally, again, you need to be asking the question about what is normal. How full are our hospital ICU rooms normally? Who are they full with now? How full are they during flu season? (I think you'll find they're usually pretty full, and that patient census waxes and wanes.) The better questions to be asking about healthcare in rural America is why is it so weak? Why are we always short of doctors and nurses? Anyone who lives in a rural area knows you are hours away from a hospital, and there there are about two hospitals in this entire state able to handle really serious situations. You can rack and stack the beds in any facility you want, but the staff level isn't there. It's less a question of the pandemic and more a question of the decades-long deterioriation of health care in rural America now being put to the test.

So back to the question: Is North Dakota the festering pit of infection where the dying are being put out on the street, like everyone says we are?

No, you don't have to "evacuate" your friends and family from the Dakotas and take them to another state (as I've seen some people say online). That's pretty ridiculous.

But I'm guessing most will get it sooner or later, just like everywhere else.

UPDATE October 24, 2020: So apparently this post got a bunch of shares. Anyway, feel free to comment, but if you're anonymous and you just want to argue, you'll need to put your name to it. I put my name to my writing. You can do the same.

UPDATE October 25, 2020: Regarding the difference in rates from the CDC and other sources in state, it varies day to day, obviously, but also, look for asterisks. Rate can be calculated in different ways depending upon the numbers you're using. Below, we see two rates. 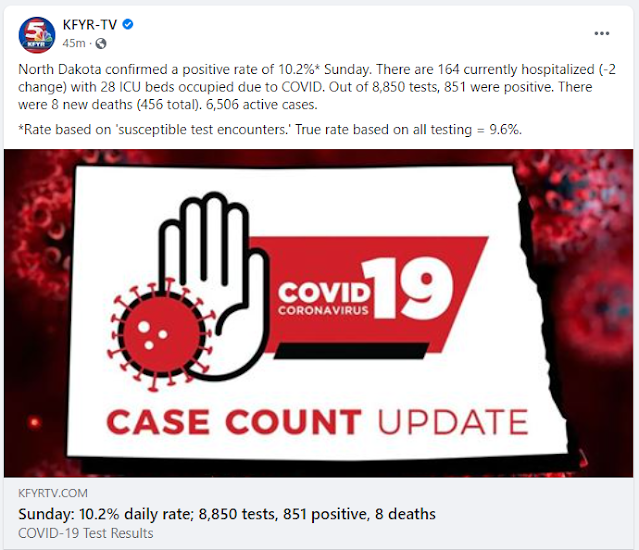 UPDATE October 28, 2020: A caller on the Jay Thomas show pointed out something really interesting. He used the example of a factory being inspected for safety. If one factory only has three inspectors, and they find three violations, but another factory has twice as many inspectors and they find four, which factory is safer? 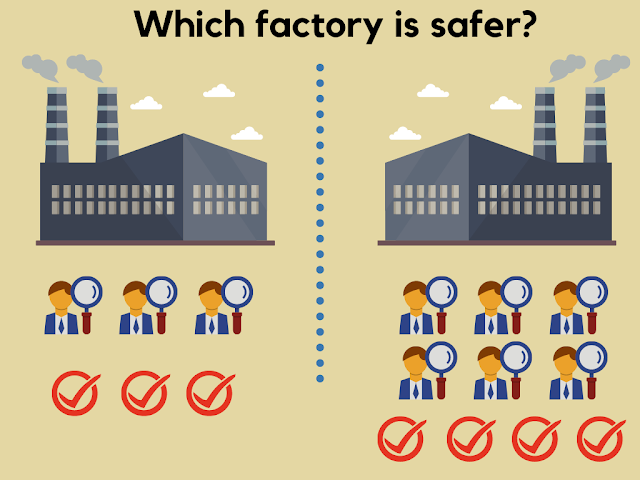 North Dakota's testing amount is off the charts. We're the factory with more inspectors looking for positive cases. That we find them isn't a surprise, and that we find more of them is also not a surprise. We have more people looking. But are we less safe than states who have fewer inspectors, lower positive cases, and similar death rates? No. We're not.

The caller pointed out that comparing states with each other, when their approaches are so different, isn't a great way to grasp what's happening. In some cases, North Dakota has 2X testing as other states, so saying positives per capita is the highest isn't useful. We have more inspectors in the factory looking.

UPDATE October 30, 2020: You may have seen these graphics now circulating. They take the exact same data the state health department puts out, and simply presents it in a different way. I didn't create them, but I sure endorse them. 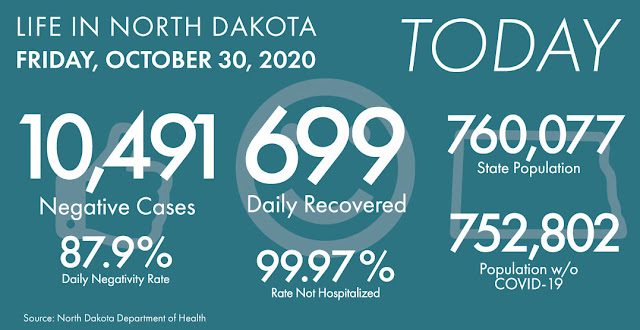 UPDATE November 1, 2020: Thanks to a medical professional and others, we have the following information that our public health officials conveniently have never told us.

These are the death totals for North Dakota in long term care facilities, where many of our deaths have come from. I bet you think 2020 will be off the charts, right? Because that's what we're being led to believe. 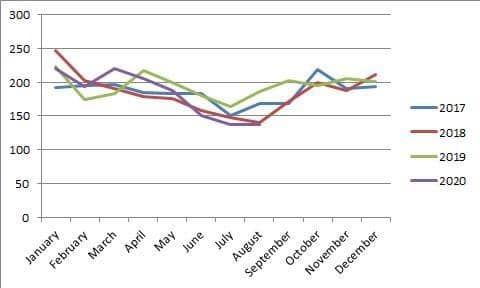 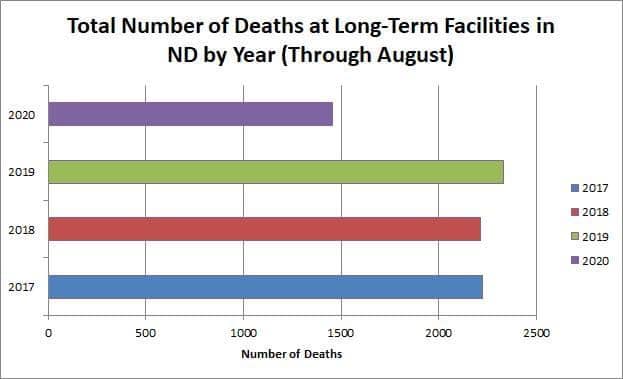 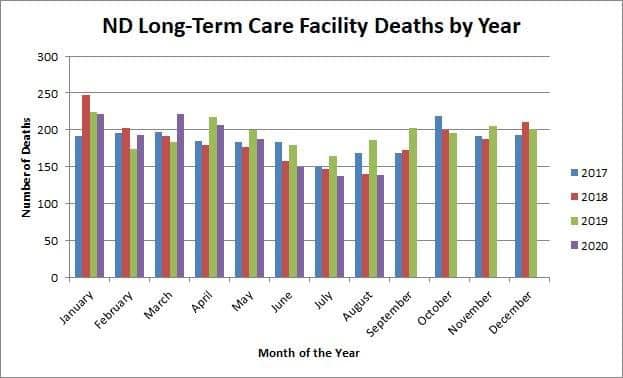 Do you see that? We're not off the charts at all! Here's the numbers: 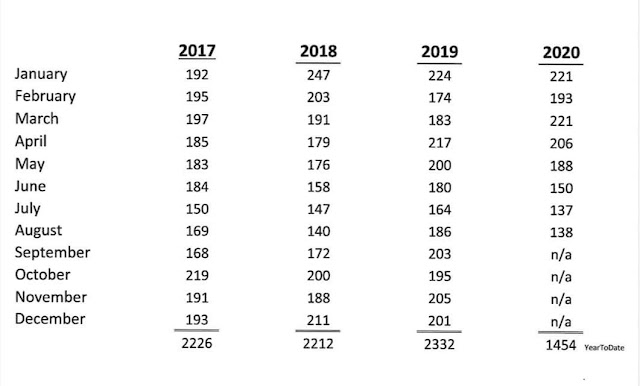 As I've repeatedly said, when some public health official or expert starts launching into scary numbers about cases, deaths, numbers in ICU...ASK THEM WHAT'S NORMAL. (Except they apparently won't tell you.) Demand that they provide the data for the past three or so years so you can see how this year compares. Without that information, we can't possibly know if this is a crisis or not.

Don't let them freak you out about positive case totals (which we'll be talking about regarding false positives and PCR cycles in a future blog post). And don't let them freak you out about the deaths, either, because so many have come from nursing homes but are in line with deaths we would normally have seen from nursing homes. We'd expect it be significantly higher based on the hype, or at least somewhat higher since it's a new virus. But we generally don't have that state-specific information to know for sure.

Feel lied to yet? Feel a bit manipulated? You should.

UPDATE Nov 10, 2020. A letter going out to the legislators has incredible information on the sketchy PCR test we're using, the cycles we're running it at, the systems our state is using to run the tests, and insider information on how unreliable the test results are. In other words, YOU SHOULD BE QUESTIONING THE POSITIVE TEST RESULTS.

You can get that PDF here. Or you can read about it as a blog post here.

New comments are not allowed.