As of tonight, both Fargo and Minot have put out city mask mandates, but have said there is no punitive punishment. Mandates with their pants down, basically. With Fargo, it was Mayor Emperor Mahoney who made the decision all on his own.

A couple of things.

1. I'm sure one by one the other major cities in the state will follow suit.

2. I'm guessing that business owners who don't want to enforce it may possibly face some pressure by the DOH, city officials, etc. and possibly feel that if they don't go along with it they may have some form of punishment (e.g. liquor license not renewed, etc).

3. I'm guessing there's a lot of behind-the-scenes manipulation going on in which those in power at city, county, and state levels are actively finding ways to get mandates and restrictions through without it having to fall at the governor's feet so he, like Pilate, can claim to have washed his hands of it all.

4. People who are denied essential services should take note. People who are harassed by stores or other people because they aren't wearing a mask should be ready to record it on their phone. When government issues a mandate that they say they won't enforce, they are clearly giving people and businesses permission to harass, shame, confront, pressure, and instill fear in those who are not complying. It may come in handy to have footage and proof that the city's actions led to your harassment. Lawyers may enjoy that.

5. I find the timing on the mask mandates quite predictable. If we are in our peak, the numbers would begin to drop naturally. The recent rate was less than previous days. How fortunate for these mask mandate overlords that they chose to enact it on such a day. What a lovely claim to make for masks when you mandate them on the backside of the curve. Nevertheless, the case rates better drop like a rock in two weeks. Do watch for the overall curve, to see if we were on the downward trajectory already, and if not, see if the mandate does what they say it will making sure the testing numbers remain the same.

6. Mask use has been increasing since July, and Cass County has a high compliance rate (83%, found here) and yet even as mask compliance grows and the propaganda increases and people cave...the cases continue to rise.

7. It is disingenuous to use the signed letter of a bunch of pediatricians (some of whom are not from North Dakota) when there is no shortage of other doctors and medical experts who would say the opposite, yet Fargo, in its cherry-picked reasoning, has done exactly that. 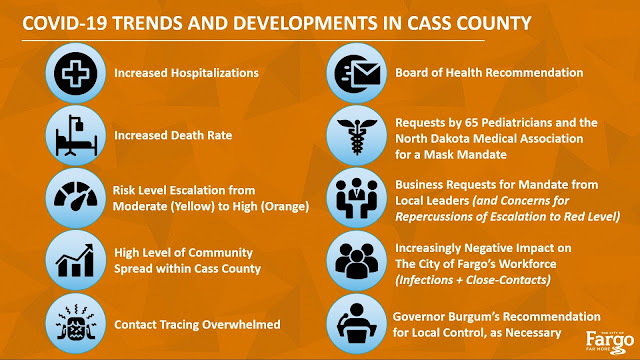 It's very much OK if you don't wear a mask, even though the pressure against you is horrifying.

If you don't wear a mask, rest assured you're not alone.

You have many medical experts, including doctors, epidemiologists, and infectious disease experts, behind you.

You have the data to support you.

You're not selfish for exercising freedom.

Keep your face free and clear, you symptom-free person, because even Dr. Fauci has said you aren't driving the outbreak.

You're not different from Americans during the Spanish Flu (yes, they didn't like masks either, and the masks may have contributed to bacterial infections which possibly killed as many or more than the flu), even though past pandemics have been used to try to justify what's gone on with this one.

This older post, about the changes being made to avoid any business that forces customers to wear a mask, is still true. Despite the government's best effort to force people to comply, a creative approach to daily life, mixed with finding others with the same mission and connecting regularly, has made the "abnormal" something good.

The private group I manage, a group for those who won't wear a mask (for very good reasons), continues to grow every day, as does the desire to find businesses who won't force them to do what they believe is wrong to do. We are building lists, and people are reporting back which places they can freely do business without a mask and which places make it clear they are unwelcome.

Keep the petri dish off of your face. And vote those people out, those who would take away your freedom and perpetuate a state of emergency for eight months while using propaganda to get you to do things you don't want to do. If the legislative session doesn't bring forth an end to the emergency declaration almost immediately as well as laws that seriously curb the power of the executive branch and the department of health, take note for the next round of elections