Welcome to the second law of thermodynamics 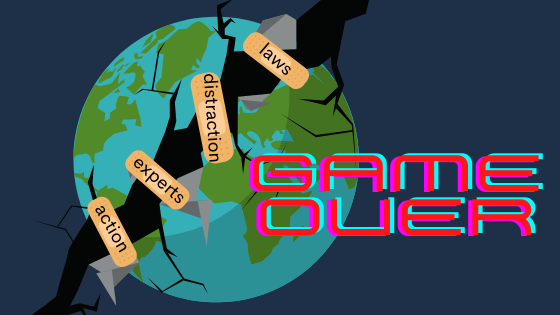 The first law of thermodynamics says that energy is neither created nor destroyed. That's about quantity.

The second law of thermodynamics says that as energy is used, more of it is wasted. It doesn't go away, but becomes something less useful or chaotic. Systems degenerate and become disordered states. That's about quality.

Entropy says that the natural evolution of all things is actually de-evolution. It's not what you've been told, that we will evolve more and more to perfection, that we evolved from blobs into unique and special biological forms, forever branching out to greater precision and existence.

No, we're on entropy's path. 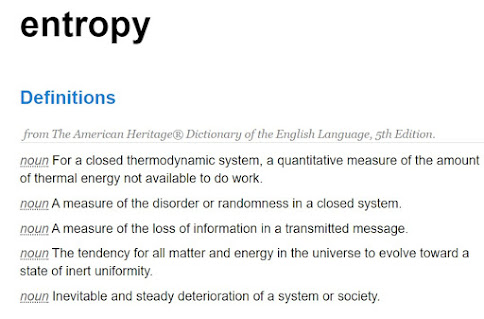 We're living the second law out, ever more clearly this year.

The cracks in the systems were always there, but they were exposed and widened this year.

Supply chains failing. Blatant ham-fisted coercive ad campaigns to change behavior. Public meetings the public can't easily attend. Churches shut down, only reopening if you sign in. Political fighting. Social communication platforms restricting communication with unabashed bias. Tribes filing motions to pressure the state for mask mandates. Releasing criminals and arresting citizens for mandates put into place by the executive branch alone. Six-month states of emergency powers. Households divided over politics and pandemic. Friends ratting out neighbors for breaking mandates or being close contacts. Cities burning from riots as people channel their energy into violence and anger and destruction as weak media try to convince themselves it's all peaceful or justified. Adults gripped in fear, unwittingly terrorizing children's mental health. People clamoring for restrictions and a punitive approach to strong-arm people who refuse to be afraid. Schools where previously straight A students are failing because of the failure of "distance" learning.

I've mentioned previously how all that's happened in 2020 has made some things easy for me to let go of or change in life. I've seen and heard others mention something similar, how all that has gone on this year has made it easier to release the grip on this world and this temporary life. Things that would have been painful for me to accept just last year God has flipped on their head and not only do I easily discard them, but I'm running from them. I don't need them, I don't really even want them. I can almost see the entropy at work and realize how futile it is to try to hold onto something that's degrading in my grasp.

I saw the big prayer march in Washington D.C. a few days ago. When I go for a walk, I pray for my country, my state. I pray for my national and state leaders, that they'd have wisdom. But mostly, I want people to come to know Jesus, and that's it. I'm not praying for a miraculous turn-around in this nation, that we'd go back a few decades or be great. I'm not praying for things to go back to how they were. I'm not praying for more money or a great vacation or something like that. I'm just praying that as this all winds down, more people come to Jesus in time.

Even if you don't buy into my Christian faith, even if you roll your eyes and lay claim to science as your god, you'd acknowledge this reality. The second law essentially predicts the end of the universe, in heat death. Outside of a faith in Christ, the reality is pretty bleak. No one will save the earth. No one will stop death. No organization, no activism, no amount of money or conniving in smoke-filled rooms will do it. It's an unraveling that cannot be knit back together.

The second law. It's winding down, all of it. Systems are breaking apart, systems of order and culture and society and government. The second law says that even when it seems like there's efficiency and improvement in one area of a system, entropy is increasing elsewhere. How long have we only seen spots of improvement and not seen the crumbling elsewhere?

Bandaids on a leaking Hoover Dam, that's what it is.

It has been this way for a while, and if you think otherwise, you surely must have your head in the sand.

Our nation. Our society. Our culture. Our personal sense of morality and responsibility. Our relationships. Our education. We're flooded with information but people are shockingly unable to think. Our technology accelerates while our education system churns out poorly educated students. Devolving into chaos, looking for anything and anyone who promises us peace and security.

Every generation bemoans those that follow it because we see the breakdown, but something is truly broken this time. The disassemblage is beyond scope. It's across generational lines. It's society-wide. It's reaching into to every aspect of life and into your own home. You can see that this year.

I've said this kind of thing here and there in online discussions, but I also tell another truth. And that is that I haven't lost hope, because I know how the end goes. I'm actually not afraid or discouraged or panicked.

Mostly, I just can't process all the noise, and find I am liking to spend my day less and less tabulating the downard spiral in the news and online and instead, reading my Bible, listening to good preaching, enjoying simple things in life, and just talking to God.

Get to know Jesus while you still can. Game's almost over.