About an hour or so before midnight on Friday, November 13th, Governor Doug Burgum courageously dropped an executive order for a statewide mask mandate effective by midnight. Most people weren't even awake.

Did I call it or what?

Did you think, North Dakotans, that you would find yourself in this moment in which we'd be under a state of emergency for eight months with our governor signing executive order after executive order with our legislators apparently having zero interest in coming together to end his reign, preferring instead to wait until the regular January session?

That our health department would seem to really really want this kind of enforceable control over your life? That they'd want to track and trace you? Keep you from buying or eating out without a mask or other limitations? Use millions to mess with your head to get compliance? Did you think you'd see this in North Dakota? Did you think you'd see the number of people around you either happily or begrudgingly go along with it all?

Despite masks not working.

The governor knows this. He's said it repeatedly. He's seen the numbers. He's seen the same charts we have that show skyrocketing cases after months of mask mandates. Not one place who has put them in can reliably say they reduced cases.

But what courage he shows to do this about a week after being re-elected by too many North Dakotans who are—I'm sorry to say—low information voters who will check any name with an "R" next to it on their ballot.

The penalty for failure to adhere to executive order is an infraction, which according to what I'm reading could be a Class B misdemeanor. That could be up to a $1000 fine. Three or more infractions could lead to 30 days in jail and a $1500 fine, from what I'm finding online (could be wrong -- waiting for Facebook to get back to me on a fact check).

So many of our elected leaders have DUIs and domestic abuse issues, why shouldn't we normally law-abiding citizens get some misdemeanors of our own? That will certainly spice up your CV.

Citizens have called and emailed their district legislators, the governor, their state representation. I've heard nothing but pablum, form emails, or "let's just be good folks and show others we care by complying" from my supposed liberty-loving Republic representation. It's absolutely disgusting.

It's almost as if our leaders want to squash small business.

It's almost as if they want big box stores and huge online shopping corporatios like Amazon to profit.

It's almost as if they want to make anyone trying to make a living completely dependent upon a government check now that the government has made it nearly impossible to have a functioning business.

It's almost as if no one wants to talk about how people are being treated when they come to the hospitals here (sent home to fight it on their own with no early treatment protocols others have used, if it gets bad enough and O2 levels are low, they come in and get put on oxygen/cpap/ventilator, maybe with some steroids, ventilators pretty much lead to death, have a nice day).

It's almost as if they want to scare people, or make them so desperate to be rid of restrictions, that they'll line up and beg for Big Pharma's sketchy vaccines to get their "freedom" back.

Because nothing says cowardice (and a lack of other things having dropped) than dropping an executive order shortly before midnight when it goes into effect.

I will not comply.

I have not been rude to any business owner. If I am not wanted in a store without a mask, I do not go there. If I'm asked to leave, I do. As such, I will continue to not wear a mask, and if a business asks me to leave, I will. My savings account continues to grow since I am spending very little and happily not contributing to sales tax in my city or state. My only shopping has been in mask-free stores and that, apparently, means none. I guess I should have enough to pay some fines.

If only our King Burgum would have the testicular fortitude of South Dakota Governor Kristi Noem.

If you're a business owner and would like a sign to hang on your door that says masks are required, but you are not allowed to ask about medical status regarding wearing a mask or not, email me and I will send you a PDF.

UPDATE November 15, 2020: This was posted online the day after the state mandate. I'm putting it here to see if this, indeed, is the plan. I want this pre-dated so if this is the governor's plan, you heard it before it goes down and are convinced the mandate did anything. 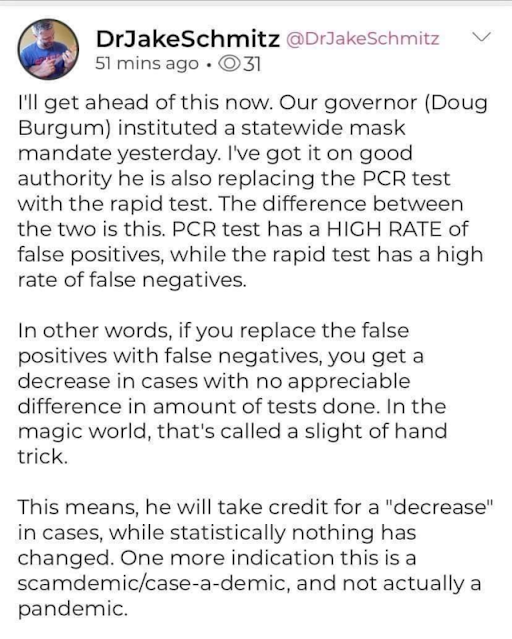