The moment I walked away from ND Smart Restart 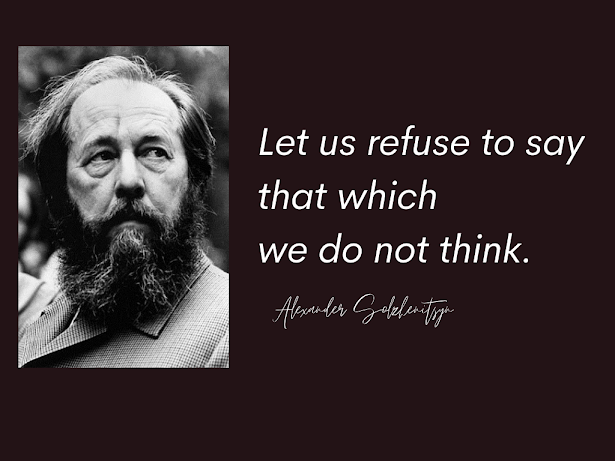 I did what was asked. I watched all the press conferences. I followed the rules. All of it. I was OK at first. I even sewed some masks and sent them to people.

Until I saw the data come in, and that the policies of various states and cities remained unaffected. Until the dire predictions didn't happen. Until the state started spinning propaganda and promoting what isn't exactly true as truth.

As a friend pointed out, everyone should read Solzhenitsyn's "Live Not By Lies" essay. "Let us refuse to say that which we do not think," he writes.

Maybe you think it's silly.

It's just masks and things that good people would do. It's like wearing a seat belt, it's like no-shirt-no-shoes-no-service, it's like coming together to sandbag during a flood, it's just doing your part, it's like stopping at stop signs, it's caring, it's showing respect, people wear masks all the time in some jobs...these are all some of the ways leaders and private citizens have pressured others to say and do things they didn't think.

The public shaming, the millions in pandemic slush funds getting tossed around, the "free" or bribed mass testing that's exceeded our actual population, clever context-free numbers crunching, wear your masks or else--this has become far more than those simple associations of seat belts and stop signs. I've addressed some of those in other posts and have zero interest in rehasing the refutation of them here.

It's not silly and small. It's the proof that mass numbers of people can be trained to do things they might not have months earlier. It's a sandbox where we can see how to get people to comply with whatever is next. They're not even trying to hide that.

You think the government and public health people aren't learning some new tricks? You think they won't turn to them in the future for something else? How handy it is to know what bit of messaging and psychology makes the masses obey?

I'm not going to say something I do not think, and repeat it enough until I do.

I'm not going to do something I do not think works, and convince myself and others that it does.

I'm not going to do something just because everyone around me is doing it.

I'm not going to use propaganda as the reason it's acceptable to confront and harass people in public.

I'm a rule-follower by nature but I won't do something or say something or believe in something by force, something I don't think or determine to be helpful. I won't be turned into a fearful shame-spitting monster because the government or some public health official  or slew of choreographed doctors tells me to.

The turning moment was outright saying: if you don't do this, you aren't a caring person.

I'm not a fan of Gov. Burgum. As of late, he has held the line in front of sniping reporters. He does a better job looking at data and acknowledging it to some degree, since he's a numbers guy. As the reporters and media howled like hyenas for mask mandates, apparently unaware and so out of touch with large swaths of the state to seem surprised that there might be significan pushback, Burgum rightly pointed out the states with months of mask mandates with sky rocketing numbers. He was direct in asking them if they would acknowledge what that data said regarding the failure of mandates.

Yet still he pushes the propaganda. He says mandates don't work but in the next breath, pushes the idea that people who wear masks are the good people.

So to political leaders and public health officials and medical professionals harping and pressuring?

Dial down the propaganda.

Strip away the symbolism of the mask (though frankly, I think it's too late).

Stop equating things with selfishness and being uncaring because you are missing it entirely. You're painting people who believe in personal liberty as if they never do anything out of concern for others and that is wholly false! You're training people to see the exercise and protection of our freedom as a selfish thing! Even worse, you gave people the permission and ideological tools to say this, to think this, about fellow citizens.

You made it easier for them to say and believe what they didn't think. You saw their fear and gamed it.

The shame isn't on those who want to be allowed to freely choose. It's on you.

"Leaders" can make life difficult for people like me all they want, smiling and smirking and gleeful to see restriction and hardship and isolation set in for those who refuse to comply and play the game, happily forcing us out and away. They can dismiss all the data, appeal to authority, and coerce people to get on the bandwagon.

You didn't get in my head. You didn't make me think and say and do what you wanted me to.

And you never will. 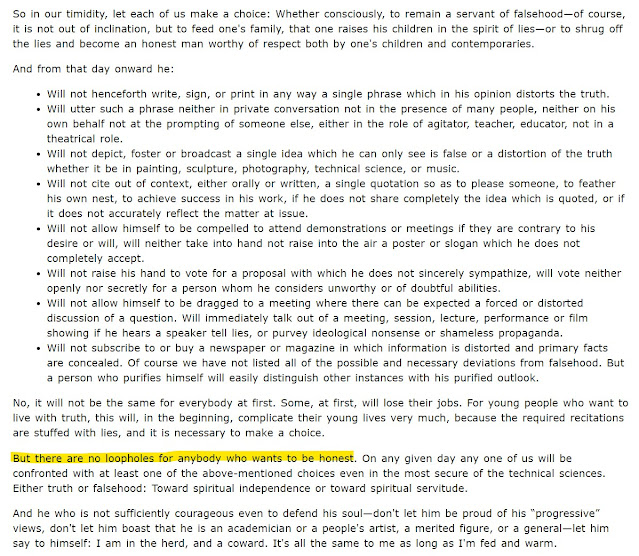