What is a preventable death? 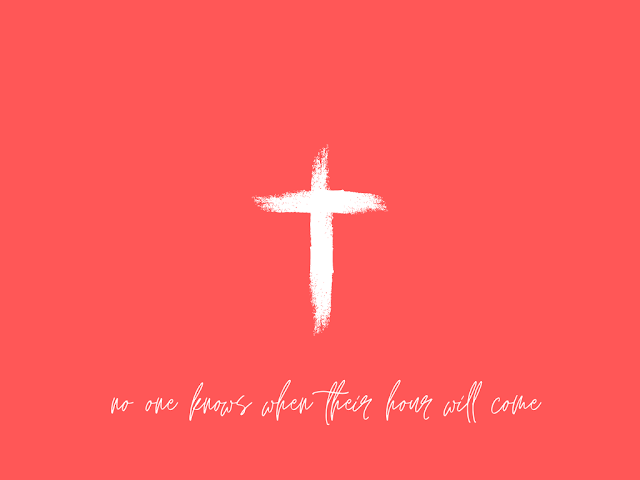 About a month ago, I felt that I was supposed to send some cards to encourage people.

It's been a rough year, and many people have been left alone and lonely, particularly the elderly. I asked my mom for a list of names and addresses of the women and shut-ins that she visited so I could send them a card.

My first round of cards went out about two weeks or so ago. Client writing has been keeping me incredibly busy, so I had only gotten to the first group of names on the list.

In a phone conversation with mom, she informed me that one of the women I'd sent a card to had just died. She was quite elderly, a sweet woman I grew up knowing from church. "She really just wanted to go home to be with the Lord," mom told me.

"Do you think she was able to read my card?" I asked.

"Oh yes, she was very sharp right up to the end."

I ask, because one thing the online Karens and their male counterparts keep screaming at me this year is that they care about reducing preventable deaths. I hear a lot of accusatory things directed at people who won't wear masks that basically say if they can prevent one unnecessary death, then it's worth it.

So what's a necessary death?

Is it defined by an age? If Dr. Kevorkian was nearby? If you're unborn but inconvenient? Soylent Green is running low?

This sounds incredibly callous to people, but this keeps getting used as an argument. It is brandished like a sword, accusing people like me of not caring because older people and sickly people matter, too. Of course they do. But think about what you're saying.

Is an assisted suicide a preventable death?

Is an abortion a preventable death?

Is an accident a preventable death?

If a person is on X number of medications and has had X number of close calls medically speaking, are they still on the preventable death list? Or do we move them to "high morbidities" and quietly acknowledge they may experience death sooner?

Is it OK to put to death someone who is brain dead, on life support, or not a contributing member to society?

Is it preventable death until the end?

Is all death preventable death? Just some? Who gets to define this difference?

Let's put it all out on the table, and go one step further since I've been accused so many times of not caring if people lived or died, of not being truly pro-life.

I'm not a gambler, but I'm willing to bet that when the CDC puts out this year's suicide totals (they do them after a year is up), drug and alochol related deaths, domestic violence related deaths (which will be under-reported), and failure to thrive deaths from assisted living (which I don't think the CDC calculates), we'd find we have more deaths from the side-effects of the mitigation of the pandemic than deaths from the actual virus itself.

I remember Michelle Obama blaming  President Trump for being responsible for more deaths than various wars because he didn't lock down the country and put out national mandates or some such thing. What she said is not exactly true, though it's easy to think that considering how we're being told to think about what's going on.

I know all of this doesn't matter when it's one of your people who have died from whatever reason. It hurts to lose someone in this life. My parents are older. I get it. But when we use the idea of "preventable death" as a justification for certain actions, we'd better define what that means.

This year's response has been driven by a fear of death. If you're not a believer in Jesus Christ, I get why you have fear. It's an unknown. Maybe you're hoping you're good enough to be an angel in some cloudy harp-filled heaven. Maybe you're sure you've done enough good things to outweigh the bad things, not thinking about how everyone's definition is different if there is no standard of Truth. Maybe you're banking on ceasing to exist, or annihilation. Maybe you think you can earn your way to heaven after you die.

But if you call yourself a Christian, there are some real problems with that fear.

Our actions reveal what we really believe, not what we give lip service to.

Look at the verses at the top of this post. Do you actually believe them? Are you living as if you do?

Jesus himself made it very clear that our real home is not this earth, and this life. It's with him. It's after we die.* If you believe that, it's supposed to be your hope. If what you have is fear, have you really put faith in Jesus or do you just go to church on Sundays or holidays and toss a few bucks in the offering plate? Is church just a place to get married and buried? To see your kids sing in cute Christmas programs? To have respectability in your community?

North Dakota has a lot of cultural Christians who haven't really given their life over to being a follower of Christ. Being Lutheran or Catholic or Methodist is like being Scandinavian, it seems. It's the tradition you were raised in. But then along comes a virus that's hyped to scare you into thinking about death, and suddenly that tradition isn't serving you well. Because life and death are the big questions of faith, and it's what Jesus was all about.

One thing I've noticed is that those who truly have hope and faith in Christ, and who believe what he said about our true home, are less fearful. They aren't reckless. They aren't tempting death. They aren't base jumping and licking doorknobs. But they are not afraid of the specter of death.

You do not know when you are going to die. Your hand sanitizer and masks and plexiglass shields and lockdowns will not add one more minute to your life.

No lie, but every day I wonder if today will be my last day on this earth. Maybe you find that morbid, but I don't. Maybe you think we should only focus on happy positive mindful Instagram-filtered puppies and flowers and such things and pretend we weren't all on the same train headed for death at some point.*

You know what thinking about your mortality, and the daily potential for it, does?

It makes you really really appreciate life. The trees, fresh air, a good cup of hot chocolate, wonderful books, pets, friends, simple joys, walks, art, reading God's Word—all of it. When you realize that every day, even every hour, could be your last, it changes how you think and what you do.

It changes what you believe.

It changes how you live what you believe.

Perhaps that's why the restriction or removal of so much of those simple joys this year has angered me.  Mask it or casket, you know. Socially distance. Stay inside. Stay away. No gatherings. Life behind a Zoom screen is a real substitute for church, business meetings, and medical consultations we try to convince ourselves. We're doing it in the name of "life" but we are reducing life to something much less than life, something meant to preserve the mere organism just a little bit longer but not forever, in order to hopefully chalk up quantity at the sake of quality.

That is the real innoculation you need this year, the one that gives peace instead of fear and anxiety, the one full of hope instead of discouragement.

*Or get taken to heaven.