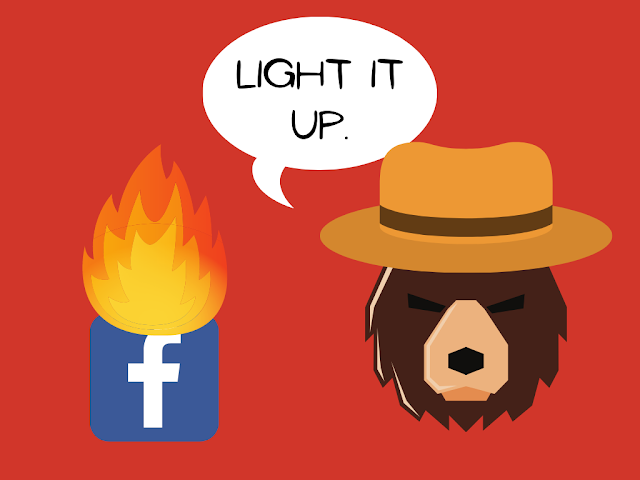 I originally wrote this on December 4, 2020, but never got around to posting it.
Obiously, things have changed in the continually awful direction.
Big Tech is purging people of all walks of life from their networks. You can say it's an issue of private property rights, but when communication and commerce in the digital age has moved online and only a handful control it, we are moving in the utility aspect of these social and communication and payment platforms. Corporations that can shut down payments, communication, and publication based on trumped up accusations are not some mom-and-pop store who doesn't want you to come in if you aren't wearing shoes.
They are a utility.
You shouldn't lose your water or electric service because of your political or social ideas, correct? Extrapolate that with the ability to speak and participate in commerce.
It's not even just about breaking them up, since they obviously collude with each other and agree to do the same action all at the same time. They need to be open to lawsuit, and we need a digital Bill of Rights. Of course, that assumes the Selective Justice Department and courts would actually do anything with the cases brought before them.
+++

"I'm over on MeWe and Parler," I said. "Mostly on MeWe. Parler is more like Twitter and I like the MeWe experience better." I acknowledged that Parler had the most content producers however. "You need to set up an account and get started on alternate platforms."

"But all my photos and friends are on Facebook."

Stop it! Start waking up and taking stock of what's going on. They are coming for you, too! If they can jail a large number of average joes like me, all at once, it tells me that they had their eye on us and were ready to make the move when the first opportunity arose. They know what you're posting, too.

You can, and you should.

I've been active on MeWe for several months, really working hard to find content and share content and right now, it's better than Facebook was. There's a lot on there. You simply have to try. You have to be willing to adjust to something new.

There was a point where Facebook was new and confusing to you, too, but you figured it out. You found people. You found groups. You made it what it is. You can do it again.

What caused Fakebook to remove me from accessing my profile, groups, and pages? 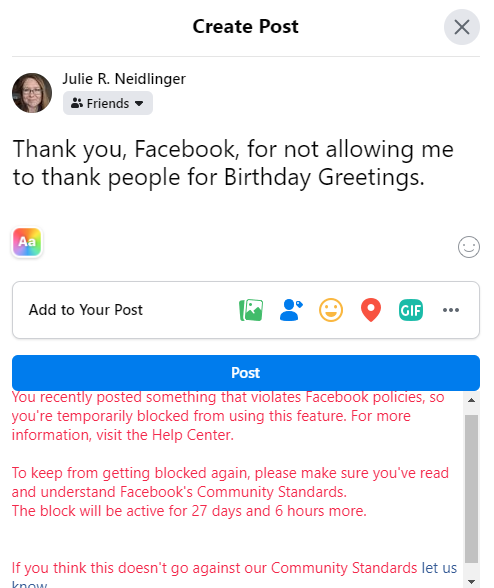 Facebook has no community standards. They have communist standards.

They have, essentially, created a religion because they are providing weighted morality to ideas and speech.

I deleted about 20+ Twitter accounts I'd had over the years when they removed the sitting President from their platform on January 8.

I'd been on Twitter since shortly after it was created. A viral blog post pushed my followers past 6,000 and I frantically started remove them before it got too big because I preferred a small group of friends. I'd walked away from it two years ago, but never deleted any accounts. 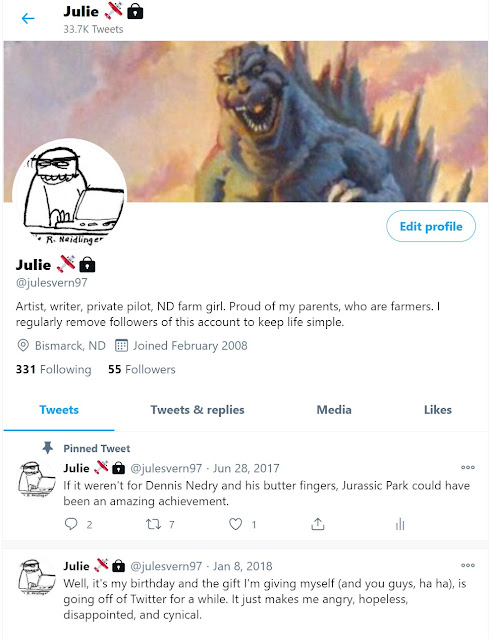 Twitter's "standards" are a sewage pit of vipers. They leave actual terrorists and world leaders calling for the death of people on their site, but pull down President Donald Trump for asking people to be peaceful because that's inciting violence.

You have to make the effort.

You have to make the habit.

You have to sign up on alternate platforms and build connections and communication there.

You have to take the time to learn the new platform.

Saying "it's too hard" is what Big Tech wants. Your laziness and unwillingness to walk away from where you've been for years is keeping you in an ever-tightening censored digital hell in which you will self-censor and, at some point, report people to show yourself a good online citizen.

If you will miss the content websites share, make a bookmark folder in your browser and save those website URLs in it. Visit the sites directly. Don't be so lazy that you have to have them all served up in your feed, because then you are at the mercy of algorithms that decide if you should look at them at all.

There was a day, before social media, where we used RSS feed readers and folders of bookmarks to visit our favorite sites. It can be done.

As much as you can, do it now. If you manage business pages on Facebook, set up a fake profile as an admin and ONLY use that to manage the page. Do nothing else with it.

This is what I posted on MeWe, a site my family and I had started the move to more than a month or so ago (which we are all glad we did).

What to do as Big Tech cracks down and Congress does nothing:

Yesterday Facebook locked me out of their network. I can't post, can't manage business pages, can't use Messenger, can't manage or moderate groups. A North Dakota freedom/liberty group I am an admin for seems to have had all moderators shut down, so there will be no more posting in that group. We told people there repeatedly for many months to get over here to MeWe and they gave all kinds of excuses. Well, here we are today, a massive Big Tech purge.

What to do? Here are a few musts right now. I will keep adding to this as I think of things.

1. Download all of your Google data using Google takeout. If you have a lot of data, do each seperately (i.e. Calendar alone, then Gmail alone, then Drive, etc.) Especially crucial is getting a copy of your contacts, and getting them outside of Google. Save on your harddrive and even print them out. -> https://takeout.google.com/ You can directly export a CSV version of your contacts from http://contacts.google.com if you are a Gmail user.

2. Sign up for alternative social networking sites and alert your followers to where they can find you. (Parler, Gab, MeWe, CloutHub, Rumble, etc.) If Facebook puts you in jail like they are doing many people, you can at least get that last post in so they can find you.

3. Get a Protonmail email address. Let your close family and friends know about it. There is a mobile app, so you can also use it on your phone (unless Google/Apple target that app next) -> http://protonmail.com

5. Contact everyone in Facebook Messenger that you regularly communicate with and get their email address as well as giving them yours. When Facebook locks you out, you can't communicate with them. Regularly export your email contacts as a CSV file and save on your hard drive.

6. If you are using a password management service, download a copy of your data ASAP. Do this regularly. You need a copy of that on your harddrive or somewhere else.

7. Consider getting a stand-alone GPS map device for your car if you don't have one, instead of using the maps on your phone. Get a little faraday bag for your phone so that you can put your phone on airplane mode and in the bag and you won't be tracked (I tried it; it works. I got one off of Amazon). That way you have your phone for emergenices when out and about, but you're not tracked otherwise.

8. Consider getting an old-fashioned paper subscription to news. The Epoch Times is a good one.

9. Consider using a VPN. Definitely be using something like Duck Duck Go as your search engine. Firefox/Mozilla is no better than Google, so try Brave or Qwant as your browser.

10. Start buying postage stamps. If you can't do it in person, order them from the USPS website. Get a few international stamps if you have international friends. Get some envelopes. Be ready to use snail mail for communication again. I've been increasing that lately, and ordering stamps to have on hand.

11. Stay in touch with people on other networks. If you're locked out, you'll be able to email someone still on who can alert the others how to contact you.

12. Use the Signal app instead of What's App and other messaging systems. It is private/encrypted. --> https://www.signal.org/ Telegram is another option, a kind of group chat/messaging app that many who were on Parler quickly turned to so they could at least provide updates to their followers.

I've backed up my blog. There's a reason I started building a postal mailing list. Your email list may be purged by Big Tech, like they did to President Trump. What you own is what you have on paper or on your personal hard drive. Make it happen.

Because this week, we got to see what Big Tech is really like, and what they've been waiting to do for years. The question is, are you going to take action, or go about business as usual as the water in the pot gets hotter?

If you are still on Facebook or Twitter as a kind of ministry and plan on staying and posting truth as long as you can, go for it. But you'd better get on some other platforms and build the same content, because your time is running out on Facebook and Twitter.