Maybe it was when I was in the ninth grade, when we first discovered Rush Limbaugh.

My sister drove a pale yellow 1978 Chrysler Newport back then, one all the kids called the Big Banana, and she was my ride to and from school. Sometimes we'd go to Devils Lake for her after-hours veterinarian job, or maybe to basketball games. That big metal car would float down the highway and we'd listen to Rush Limbaugh on AM 550.

Or perhaps it was in the 1975 Dodge club cab two-tone brown pickup we'd use to haul around the beat up horse trailer to horse shows, listening to Rush as we slogged down the highway to Towner with our horses in tow. He'd talk, the windows would be down, hot summer air whipping in, and my sister would be spitting sunflower seeds into a cup or tossing them out the window as she drove with one hand and got a farmer tan on her left arm.

Up at the farm, the FM radio stations didn't always come in so great. We were stuck 40 miles from FM in either direction, but AM was always solid. Some of those old vehicles only had AM as an option. You set the first radio punch button for 550 and you didn't mess with it.

We bought Rush's book See, I Told You So. No internet back then; it was at a bookstore somewhere. We subscribed to his magazine, the "Limbaugh Letter." It was exciting to get mail, and that was probably one of the first current event or political books I read.

The timeline on all of it is a bit fuzzy, because I don't remember not thinking, around the near noonish time of day if we were on the road, that we should turn on Rush. You didn't even have to say it. You just clicked on the dial and we were both in agreement.

So I cried yesterday, when I found out he died.

It wasn't a surprise. We all knew he would die soon. But it was still a surprise.

"Same. Listened a lot in college--actually felt some sadness when he'd sign off on Fridays," my friend replied.

I thought I was the only one.

Christian singer Carmen had died the day before and it felt like all of my good teenage memories were dying away.

I watched as people shared their own tributes to Rush, many with similar stories as mine. Not the car and the pickup, no, but just how his unique voice became their first exposure to conservative politics.

I went and ordered a set of his Rush Revere books.

I know he had a faith in Christ despite all of the Hollywood glitterati gleefully sure he was in hell. I appreciated seeing all of the tributes and expressions of genuine love for Rush that rolled in on Gab.

And then there was this: 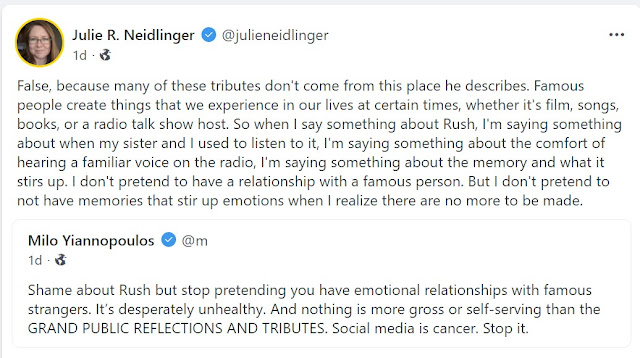 I know who Milo is. I've seen his stuff over the years. His whole schtick is to provoke.

But he's wrong, you know.

People mourning Rush's death aren't confusing it all with having known him personally. It's not weird to be sad that a person you listened to off and on since you were in the ninth grade has signed off the air permanently.

This is a dark time, and the loss of any positive voice who loved life and refused to see things as a negative "dark winter" is painful. We're mourning the fact that an incredible radio talent is gone when it seems we would need him most.

Maybe these others are like me, taken back to the years when you thought that life was so tough because you never realize the good old days when you're in them. Years where your memories of being with family you love and doing the glorious things we did during at that age in a rural area and in a time unruined by the internet are all woven with moments of listening to the opening beats of The Pretenders' "My City Was Gone" knowing Rush was about to speak. For several hours each weekday, we learned about politics, history, and how to think critically about what we were hearing in the news.

They're pieces of your memories. And when they die, you realize your memory of them has become finite and you start to wonder about the moments associated with it.

He sat in front of a golden microphone in a city on the east coast, letting people call in from all over the country, and two North Dakota farm girls cruising down the highway got to hear it all. It wasn't like anything else. It can't be replicated. It's over.

Though I know he's with his Savior Jesus Christ now, I'm very sorry Rush left us.

I'm not going to apologize for feeling sad.