The casual shuffle back from the line 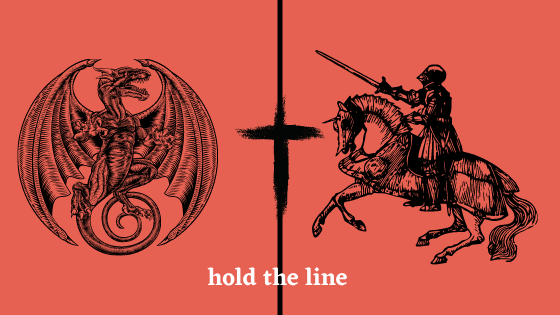 My greatest frustration in life is, I am realizing, people who won't hold the line.

Most won't draw a line, sadly, but those who claim they're with others at the line too often won't hold it when things get bloody.

This is why our nation and our culture is an absolute sewer, crying out for real judgment from God. Because people don't see or value the line, much less hold the line. It got tough, it was easier to step back and mask it as some kind of noble compromise done by the intellectually and logically sound mind, making it appear as progress and good. They are so eager to show the opposition that they aren't like the crazies still trying to hold up the flag and their swords at the line, that they'll turn on those they used to stand next to.

And the highway to hell just gets smoother.

In reading a book about totalitarianism (and its rocketing rise in the U.S. by the left), I was most struck by the stories of people who lived under Communist rule in Eastern Europe who held the line. They didn't lose their faith, their humanity, and the truth. They didn't let propaganda change who they were, how they were, or what they thought.

They held the line.

It's easy enough to spot people running from the line. They are the ones who, a day after attack by social justice warriors and cancel culture generals, completely grovel and apologize and make absolute fools of themselves.

The more difficult one to spot is the one who casually inches away.

These are the people who were right there with you, who all of a sudden, when things begin going south, start hedging their bets. They walk back statements, they begin putting eloquent and noble comments out there to suggest that they weren't so silly as the rest who really thought holding the line was valid or even at the right line, that they were questioning the value of the line all along. They start a gentle pile-on as people being taken down at the line start falling.

When things are good, and the group surrounds them without much wound, they're all in.

When the fight is one-on-one, they come up with some "yeah buts" and justify stepping back and drawing a different line.

You know how it is. We saw it in spades in January. People who had flocked to President Trump quickly distanced themselves. People began overt and subtle slams against anyone, religious or political, who had associated with him. Politicians who had clamored for his endorsement for the 2020 election turned on him.

You run to whatever line you think is better, and all you get good at is running.

In the 2020 election, the line wasn't President Trump. It wasn't "Trumpism." It wasn't against a red wave of Republicans, but a red wave of a kind of soft totalitarianism Marxist awfulness riding in on huge corporations, big tech, academia, and corruption. And by running, you joined the invasion.

How did you run?

It's going online complaining about all the things you're being forced to do, and thinking that complaining is your contribution to the fight. It's shopping at the Big Box stores while complaining about what they stand for. It's staying on big tech social media while knowing and agreeing it's terrible what they're doing to others, while you adjust what you say so you don't get the boot. It's all the tough habit-shattering discomfort you've refused to take on (that's the battle) because you'd rather not be inconvenienced beyond agreeing and complaining something is bad.

Essentially, you agree the poison is terrible while you keep buying and eating it.

Have you ever held the line? For your faith? For your beliefs? For the Truth? For your nation? For what is right? For the sake of not living a lie? Or do you find a way to excuse and philosophically explain away and shuffle back and constantly lose the ground and wonder why we are where we are?

Yeah, you need to know what lines are worth holding.

For the Christian, it's standing for Christ and for the liberty to exercise faith, free will, and life with a goal of spreading the Gospel. That line pops up in all kinds of ways in our culture, which is why many people who are made fun of or simplified into stereotypes are standing at lines the more "woke" Christians are saying aren't necessary, woke Christians who continue their backwards slide to compliance and restriction and adopting all kinds of crazy culture movements as part of the "gospel." Can't open our church? OK. Can't speak about some types of sin or things found in the Bible? OK. Pressure to march in a protest that is Marxist? We'll say it's a gospel issue! We'll write op-eds in mainstream media and wrap it in just enough Jesus to whistle to believers but let the elites know we're a team player! We'll do anything to keep our platform safe and our fancy church building open! Stop fighting those battles, fools, because we woke Christians are doing just fine away from the line and you could, too!

If you don't want to hold the line, that's fine. But please don't sidle up to me and the rest, brandishing your weapons, pretending you're with us on the line until the day when it's clear the onslaught is real and the evil hordes may win this fight this time and you start to inch backwards pretending it wasn't really your line. Pretty soon you're just behind us, stabbing us in the back.

Just get in with the enemy and be done with it.