It's written on your heart 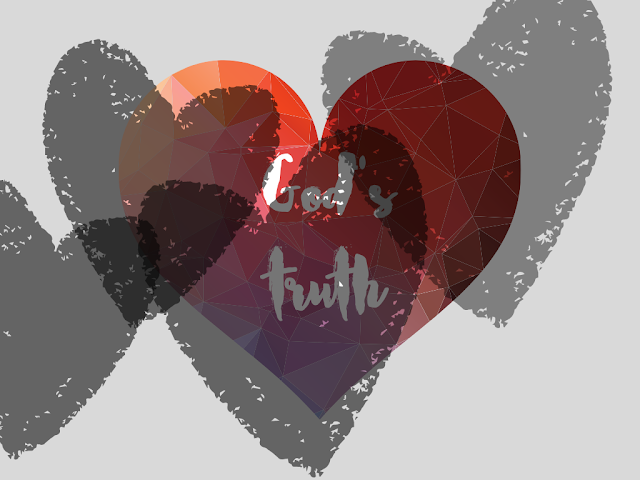 It's amazing how, in a culture that is always admonishing to follow your heart, we ignore the truth written there.

Just like he wrote evidence of himself all over his creation so that no one can say to him one day "God, no one told me you existed!", God's law is written on our hearts. (Romans 2:14-15)

We know cheating, lying, stealing, hurting, and killing are wrong. We know it especially when someone does it to us. We know it until, after we've refused to admit it long enough, that God turns us over to our disgusting and evil desires and our heart grows hard and we call evil "good" and call good "evil." (Romans 1:22-25)

We're seeing a lot of Romans 1-2 happening in our world today.

Try as they might, though, they can't stop hinting at truth no matter how much they wrap it in a lie. I have found it fascinating over the years to watch Hollywood, that faucet of filth, churn out films that can't help but have bits of truth in them.

You cannot simply be "spiritual" and get by. You must believe in the one true God. I don't care what Oprah has told you. There is no way to the true God except through Jesus Christ. If you do not believe that to be true, you are saying there is no God because you deny who God is.

But in the midst of denial, people still reveal the truth unwittingly.

Our entertainment, which is mostly garbage at this point, still reveals this even in the midst of its decay, because the truth of this world which God created cannot be removed, denied, swapped, or ignored. It undergirds everything. Lies may dance across its floor, but the floor is built on truth.

It's one of the reasons so many churches fall into the trap of preaching sermon series' based on popular movies. Yes, you can find Biblical themes just about anywhere; it doesn't mean you should preach on that movie. It doesn't mean you should have people watch it. It means that if you preach God's Word, people who stumble upon it will be able to spot it themselves and know God's truth for what it is, even if some movie producer only sprinkled it in to hook people's hearts and minds, wrapping it in filth and lies.

There is no God, they say, but they make movies that fixate on the cataclysmic destruction of the world by natural disasters, calling them "biblical" in scope, pulling bits of Bible verses out of context to flavor their apocalypse, unwittingly providing us a visual depiction of the great destruction that is coming to this world.

There is no God, they say, but even as they run open-armed towards deadly Marxist utopia, they continue to churn out movies about dystopian futures where human beings are nothing more than meat machines and the heroes are heroic because they stand against it.

There is no God, they say, but their horror movies depict monsters and hellish scenes that churn the stomach as they unwittingly touch on the reality of eternal hell that's coming for those who reject God, even calling it hellish in their promotional materials while trying to cling to the belief that hell does not exist.

There is no God, they say, but they embrace twisted supernatural themes and somehow compartmentalize their mind so that they can be the controlling god of the supernatural realm through chants and herbs and stones while denying the True God who rules it.

There is no God, they say, depicting a future where hate, greed, and selfishness are gone, and we live in a peaceful society where everyone loves each other and willingly shares, yet refusing to believe that Jesus Christ will return and set up just such a kingdom in the future for those who follow him.

There is no God, they say, fixating on aliens and beings from another dimension or place as either our savior or tormentor, cluelessly making a few brush strokes on the true spiritual realm canvas, refusing to see the phenomenon as spiritual but as extraterrestrial instead.

There is no God, they say, but even the filthiest, crudest, or most brainless movie features elements of what's right and wrong, getting us to cheer for the good guy, using our understanding that those exist to tweak our emotional response to the story.

There is no God, they say, but their superhero movies keep churning out Biblical themes of good vs. evil and noble people who die so others might live.

There is no God, they say, even as they try to establish laws and scold people for their wrong or unfair behavior, unaware that without God, there is no right or wrong.

There is no God who would punish anyone; love is love and God is only about acceptance (except for those they disagree with). Every new kind of "love" further clouds what a holy God has written on their heart for their own benefit.

But we all seem to intrinsically know—in varying degrees—of hell, of horror, of right and wrong, of a spiritual realm, of a true love that goes beyond the physical, of the need of a noble sacrifice to save. We create it in our stories and movies, we respond to it, and we understand it as the images play across the screen.

Why all of this?

Because God's truth and law is written on our hearts, and even if people deny him with their mouth and their actions, they cannot escape the reality of who created the world and all that is in it, and whose truths govern the world even when those truths are being aggressively hidden.

2020 (and now 2021) has made me aware of how most people are comfortable or at least willing to live in cognitive dissonance. Reality is set aside as the thoughts and words of others are used to justify feelings and actions that make no sense. A wall is erected between what is true, and what they are choosing to live by instead. I never thought so many people could live an obvious lie about so many things, and not only live it, but take it on as their own and defend it.

But I shouldn't have been surprised.

I've been seeing this my whole life, as nearly every bit of cultural entertainment has exhibited the same tendency. Somewhere inside, people recognize some tiny bit of truth and it comes out in what they say and create. But they pad it with lies so they can live those lies all the easier.

We are all on the same, singular path: standing before the throne of God before we step into an eternity of eternal joy with Jesus, or torment in hell. God's not sending you to either, so stop saying a loving God would never do such a thing. It's you who is making the choice of where you want to go.

Will you respond to the law of God, written on your heart?

Or will you keep covering it with more and more lies so you can hardly recognize it anymore?