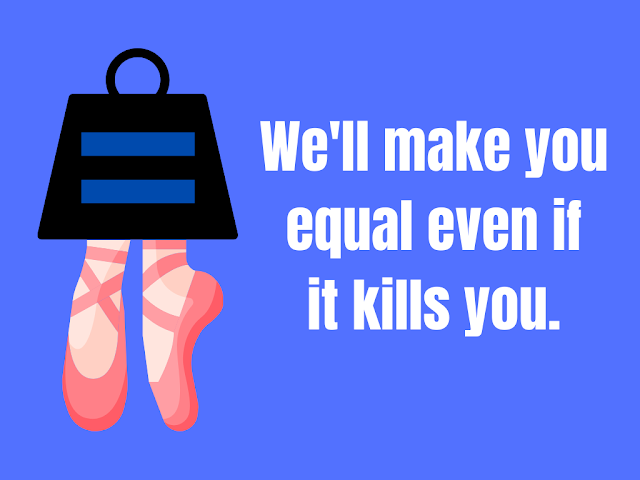 I started thinking we should ban stairs because stairs assaulted our new dear leader not so long ago.  When people fall, it's the stairs' fault according to our nation's press secretary. When I saw the video of Biden falling three times up the stairs, my first thought was that somewhere, President Gerald Ford was weeping for joy and Chevy Chase was getting a phone call.

It also reminded me of the movie WALL-E where, wrapped up in an environmental message of some sort, we discover a future where everything truly is equal and there were no stairs to assault people. Everyone is riding around in space-age floating scooters and all they basically have to worry about is eating.

In WALL-E, humans ended up with equality of outcome. They no longer had to strive and build up physical and psychological strength, improving themselves and their life. No, everyone wears the same clothes and has the exact same existence. All obstacles had been removed and everyone was assured of a bland same equal outcome in which everyone became a massive blob of fat that could barely walk, scooting about on futuristic devices doing nothing but consuming.

It's the equality that seeks to remove blame and envy and fault and responsibility and discomfort and the need to work.

That is, it's an equality that's trying to remove the curse of sin from the world, which is a futile effort unless you're Jesus. People love to imagine a God-less Star Trek world where people evolve to some great Utopian existence, but we all know that's nonsense. We don't get fit people on the U.S.S. Enterprise, excelling and being excellent humans. We get WALL-E people who just want malts and fries. When we chase Utopian equality, we get brutal communism.

It's an equality that's about downward adaptability.

Add the story Harrison Bergeron to your list of things to read (along with Solzhenitsyn, Havel, and the others I've written about) or watch a version of it, because it's a story about a lot of things, but mostly how the nation becomes a place where people are forced to become equal.

First Lady Melania Trump's message of "Be Better" surely would not survive in Bergeron's world, because it barely survives in this one. Few things are as despised now like suggesting that someone be better than they currently are. Now, it's all about insisting on everyone accepting who you are while whining on social media that no one likes you and demanding that they lower their standards so your low standards are now made higher by default.

In Bergeron's world, if you were intelligent you might be fitted with a helmet that kept blasting you with noises and sounds that disrupted your thoughts and gave you headaches and made it impossible to do any considerable thinking or remembering. If you were a graceful dancer, you would be fitted with clothing and weights to keep you plodding along. If there was anything attractive about you at all, you'd be covered, disguised, and in every way made ugly. The Handicapper General was in charge of making sure everyone was made equal, and none tried to remove the restrictions.

Much like how we handicap horses in some races so that all horses carry the same weight by adding weight to their saddle, Harrison Bergeron's world was of people handicapped to the lowest common denominator.

Reparations. Preferred college entrance for some and not others. Money forcibly taken from some and given to others. Cancel culture to address any freethinkers out there. Big Tech to silence the voices of those who would dare speak above the barriers of acceptable content established by the lowest common denominator. Made equal through outcome.

This kind of thing is now sort of happening.

We can't applaud those who have excelled and succeeded, unless they have agreed to speak only the language of Handicapper General. These celebrity and business elites are allowed their beauty and wealth and privilege as long as they use their mouth and power to push handicapping on the rest of us. If one gets out of line, they must commit public harikari via profuse and groveling apology and accept that they'll be expected to be more aggressive than normal in speaking and acting against the behavior they had previously participated in.

Strength, beauty, skill, thoughtfulness, self-control and patience which begets increased skill and wealth over time—these are punished, particularly if you celebrate the result of hard work instead of whine about the difference in terrain. It is no longer a story of the equal opportunity that stretches out in front of each of us in this nation, the exciting challenge of possibility and learning through mistakes, but instead a question of bulldozing anything that hinders, and looking to the past for excuses as to why we can't go forward unless we get a floating scooter ride to the end.

At the end of WALL-E, the round, weak humans were set on a path to making things right. They got out of their scooters and had to learn to walk again. Any other SciFi movie, and they'd have been alien food.

Harrison Bergeron was forced equality of outcome. WALL-E was voluntary equality of outcome. The former beget extreme emotion and violent bursts of hope and death, while the latter was more a plastic-wrapped society happily suckling on a giant Prozac. In both cases, society was full of weak, pathetic, and unmotivated human beings. What motivates most of us is the chance to prove ourselves on that broad playing field with all its various hills and valleys, not a motor scooter that takes us to the other side for a snow cone.

Unfortunately, the ones who think the snow cone is the motivator control media, tech, and now the barbed-wire encircled U.S. Capitol.

Snow cone, stimulus check. It's all the same.

Equal opportunity only works on people who understand what opportunity is. It's a gym for your mind, for your body, and for your spirit. It's a workout. Some have better metabolisms, but others, in working harder to compensate for that lack, excel even more than the naturally gifted. Equal opportunity is the starter's gun going off, giving everyone a chance to make the best run they can. How far they get is up to them.

Equal outcome is Harrison Bergeron and WALL-E. Equal outcome insists on using force, punishment, and propagandistic coercion to make everyone equal according to some low definition. The method might be militant or psychological dependence, but either way you can get people there.

Equal opportunity is what America is supposed to be.

Minimal restrictions and an open playing field that allows those who want to run, walk, or sit on the couch to succeed accordingly.

Today's woke social justice critical theory big tech leftist progressive intersectional transeverything media politicians are the Handicapper General. They are always hard at work, pummeling your brain, your bank account, and anything else they can with restrictions and unnecessary burden to make sure you don't succeed too much.

At the end of Harrison Bergeron, after a brief moment when athletic Harrison and a skilled ballerina have soared across the stage while live on television, Handicapper General Diana Moon Glampers comes out on stage and shoots them dead with a shotgun for having the gall to dare fulfill their natural abilities.

I'm sure in any other situation Glampers would have been for gun control.