What does Founding Father Joe Richardson have to say today?

I woke up wondering what founding father Joe Richardson had to say.

I turned to the Fargo Forum letters to the editor page, where I find all of the thoughtful and carefully constructed opinions of my fellow citizenry. It is from here I glean the necessary information to tell me how I ought to think for the day. 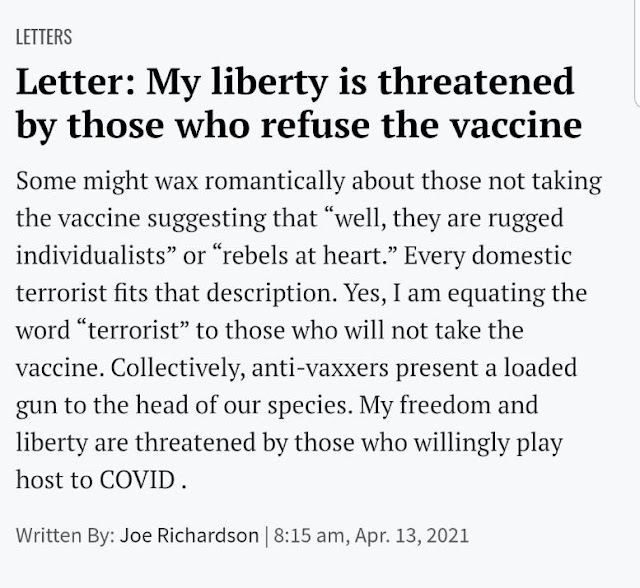 According to Joe, everyone who shares any trait (both in actuality or by the way a person is defining or identifying the trait in a person) with someone else is also equated to that person! Because people who think as an individual, and have to be rugged about it because there is government and societal aggression to get them to comply with the mob, are terrorists! Whee!

Joe! Hitler had two eyes, a nose, opinions, and male parts! He even had an h, i, and r in his last name!

Yes! I am equating the word of monstrous murderous dictator to those who have two eyes, a nose, opinions, similar letters in the last name, and male parts! (Unless you lack male parts, Joe, which might be possible judging by the Pablum you weren't ashamed to publish in the newspaper.)

What idiocy. This is logic that extends not even a millimeter from the brain cell it attempted to originate from.

Ever so thankful am I that Joe Richardson was not around when this nation was being founded, because I can only imagine what spurious advice he would offer up regarding being a Loyalist and the better future we'd have for increased taxation without representation. There are reasons people like Joe Richardson, and those who think like him, were NOT FOUNDING FATHERS and it's not just the era he was born in. It's his mentality. There were fearful freedom-hating people back then. They just didn't have what it took to found the most amazing free nation in the history of the world.

Move to Alberta, Canada, Joe. You belong there.

The letters to the editor (particularly in the Fargo Forum) are petri dish of anti-liberty fearmongering. Take down the names. Those are the folks who want you to be under the thumb of complete government control. They have ZERO comprehension of natural rights, the uncomfortable realities of living alongside other free people, and probably wet their pants at the thought of meeting someone who doesn't think exactly like them though they espouse "diversity! tolerance! unity!" out the other side of their mouths unironically.

Oh. What did a real founding father say about the result of the government being able to forcibly dictate what we each did with our health and body?

"Was the government to prescribe to us our medicine and diet, our bodies would be in such keeping as our souls are now." -- Thomas Jefferson

He was not wrong.

Look at the moral decay and abject violence, confusion, and nonsense that is destroying the nation. How interesting it is happening in climax to a time when the government and big tech thought police are also insisting they will be the ones telling us what to do with our bodies.

What people like Joe are describing is a soulless and thoughtless existence of goose-stepping mobs who yell sieg heil when they're told.

You know what presents a loaded gun to the head of the human race, Joe? Barely tested gene therapy. Have fun with it flowing through your cells.