Beelzebub cometh, and is already here 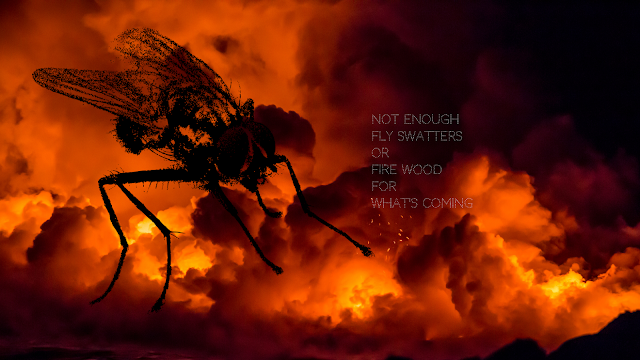 At the grocery store, I saw a sign by the door that said "Out of firewood. Out of fly swatters."

I stood there with my groceries, considering that I had purchased items with the goal of storage, cheap calories, impending inflation / drought / food shortages on the horizon, and thought it was fitting.

Out of fly swatters.

The lord of the flies surely is here, I thought. And active.

The sky has been yellow for a month as the western part of the nation burns, first just a bit of pale haze, but now an overcast sulfur color lending a sickly hue. North Dakota normally has crisp, clear cerulean skies, but each year a thick smoke haze seems to be worse. Now, every flower and every plant in my garden looks diseased because the color is off, even though the plant is fine. Mixed with the dusty drought and extreme heat (upper 90's and over hundred for weeks) makes it feel like the end of days.

Spending time with people planning vacations and retirement and post-college dreams on into the coming years, talking about sports teams and frivolity as if the world will keep turning because it always has, only pausing to acknowledge that the one hitch might be climate change, is jarring. I want to scream, as if we're all on a beach with the water rushing out to sea, that the wave is coming, but everyone is enjoying drinks with umbrellas and laughing at a beach party. I want to scream that yes, the climate for everything is definitely going to be changing, and suddenly, but not for the reasons you're being led to believe.

I guess I've steeped myself in my Bible and sermons for over a year and a half, more than ever before, leaving me unable to concoct such unrealistic fairy tales. I guess 2 Peter 3 screams at me more now than ever. Every moment around people talking about their long-term future plans and assumptions of normalcy returning feels schizophrenic.

THINGS ARE TOO FAR FROM NORMAL IN EVERY WAY AND EVERY PLACE TO EVER RETURN. Don't you see it?

The fight isn't political, or conspiratorial, or Constitutional, or any other division that pits people against people. It's the roaring spiritual battle the wages ever harder if we'd pay attention.

There are a lot of shortages right now, from chicken to labor to coins to aviation fuel. It's amazed me to how quickly we adapted and accepted shortages, both real and manipulated. The shortage of fly swatters and fire wood in that store reminds me that there won't be enough fly swatters nor enough fire wood in all of the history of the world to handle what's coming.

I'm not hopeless. Not at all. I'm watching and reading more and more online as people are hitting their knees in prayer as they are forced to lose their job and ability to function in society because of vaccination mandates, chaos in their country, and shortages.

If you don't know Jesus Christ—and I mean seriously know him, not just have a habit of going to church once in a while as a social club stand-in, getting married and buried—the time is now. NOW. You don't have much time left.

Get right with Christ. Today.

He is the Way, the Truth, and the Life. Follow anyone or anything else, and you have a dead end, a lie, and death.

You can smirk and joke and roll your eyes and shut this out and turn to entertainment and all that's frivolous if you want, but you simply don't have any more time.