Our Constitution is being destroyed because we are immoral people 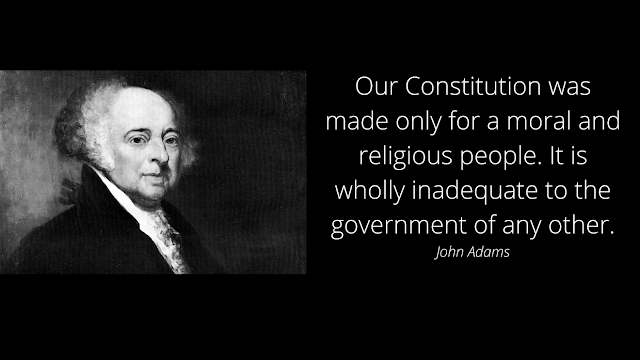 Liberty and freedom only work for moral people.

Freedoms involving speech, thought, life, work, health, and politics are always in a fine balance. On one side is self-control and an understood morality that defines that self-control, and on the other side is wild immorality where licentiousness is mistaken for liberty.

People without self-control ultimately end up losing their freedoms. It's why the Libertarian party is at odd with Constitutionalists. Their liberty has very little to do with the functioning self-controlled freedom the Constitution is built on, but is about doing whatever you want without control at all.

People who embrace immorality as liberty will lose their freedoms.

If they can't control their tongue, their body, their consumption, or their choices, they give an excuse to those who would use the results of those bad decisions to force control. If you can't control yourself, you open the door to allow others to control you for you.

Americans have very little self-control, which is why our liberty is fast fading.

Even the flag-waving Q-quoting frog meme-ing Constitution-quoting person who cannot stop him or herself from cursing, posting filthy or crude images, nasty and mocking comments and jokes is to blame. They mistake the ability to do something as permission to do something. Yes, it's easy to find where a person lives or works, but that doesn't mean you should publicize it. Even if someone else does, you control yourself. Yes, it's easy to make a funny meme mocking the appearance of someone, but it doesn't mean you should.

"What's the harm in this one joke?"

"No one is getting hurt."

Desensitization leads to an increase in degenerate and crude thought in order to get a rise until we are where we are today. Nearly everything has cursing or sexual/murderous innuendo somewhere. Body counts, blood, guts, dismemberment, genitals, every bodily function imaginable and then some, and everything that would probably even make a Roman blush are our online and entertainment norm. I can't even go into a public restaurant, one where kids are present, without hearing people loudly using "f*ck" every other word apparently unaware you didn't used to say that so casually and around kids.

We used to have censors in our entertainment to control the quality. There were ratings to make it easier for us to decide what kind of things we didn't want to see.

We don't have it, because all people, right and left and religious and not religious both publicly and privately have indicated they want something else. Something racier and darker.

With streaming video, censored content is a bit of a moot point. They don't restrict their content at all. There are times I'm still shocked at what comes on the screen, because I appreciated the censoring of language and graphic content that came over the airwaves in the years past. If it was on earlier in the evening, it was less gritty than what came on later. Cable TV had swear words while network TV didn't. You could sort of control what you exposed yourself to. Now, there's nothing. It's all sewage.

Ratings are now meaningless; a PG-13 Gremlins is mild to a sexual-innuendo disrespectful-laced saccharin-and-arsenic G cartoon movie today. You'd better not be letting your kids watch YouTube or Nickelodeon "kid safe" programming anymore because as G as it looks, it's full of nasty ideology and things like cartoon gay pride parades. You can set the chip in your TV to block anything but G, but your kids will still get a shocking dose of gross. Blocking on social media is tentative, imperfect, and attracts filth-minded trolls who take delight in circumventing it.

The reason controlling the expression (not the information or ideology) was useful is that it had an interesting circular effect: by not marinating in the filthy language and sex scenes, I didn't think of those things myself, and therefore, I didn't speak those things and add to the snowball. Ideas and information were shared, but without the crudeness and rage.

Twitter used to be fun, when it first started.

Then it got cruder and more violently angry. Perhaps Twitter tried to control the language and activity for people, but they fell for the classic blunder: if my side is doing it, it's OK. It's the other side doing the same thing that's the problem. They ended up controlling the language and ideology of only some. Awful content was still present, but opposing ideas were banished.

I've tried Parler. Gab. Gettr. MeWe. I use them some.

Gab is the most "free" but that means the least self-controlled because we've taken free to mean that any word or thought that comes out of our head and mouth is the most precious, fascinating, necessary, and interesting, the most worthy of being protected and uncensored. It seems as if some who gripe and clamor about restricted expression think that the Founding Fathers envisioned dank memes and filthy words when they wrote the First Amendment.

Yes, free speech is free speech. But can you not control your own tongue? How unfortunate such an important thing as the necessary freedom of expressing ideas and thoughts is given to the uncontrollable tongue, which turns it into a sewer.

I don't mind if Gettr or Parler don't let you say "shit" and "f*ck" in your post. I kind of wish you wouldn't. I don't mind not seeing "kike" and "faggot" and "put the satan jews in the oven" or whatever else. I don't want to see those things. But people think that's limiting their free speech.

But is this the epitome of free speech, vulgarity and memes about Jews being baked in ovens? Why would you want to die on that hill? Why would you want you fight for the freedom to be foul-mouthed and crude? Free speech is a miracle for those with self-control, expressing ideas and information. But you just want to rant because you can't say something disgusting about Kamala Harris?

Because you couldn't control your tongue, now you have to fight for free speech alongside people you loathe to be associated with because free speech is dwindling and it's all hands on deck for every tiny piece of ground you can take back from those who would take away all speech, even self-controlled speech.

It bothers me greatly that Twitter, Facebook, Google, and Amazon are actively censoring and controlling vital information. I'm not going to cry too hard if they won't let you say f*ck. (Though they do, which is why they are a massive fail because they didn't fix the sewer but thinned out the books on the library shelf.)

"They're censoring my freedom of expression!"

Learn to express yourself better. Please. Quit taking a big gulp from the clogged toilet before you talk, and exercise self-control.

Left or right, social media or internet forum, lightly crude meme or dank meme, clean up your mind and mouth and then express the thought. If you have nothing to say at that point, then take your cue and shut up and listen.

Because if you don't control yourself, someone else will. Lack of control of your own tongue gave the enemies of free speech the open door they needed.

Free speech is about freedom of information. And yes, it's about freedom of expression, but today, in this moral wasteland of American entertainment and online rhetoric in which expression has been downgraded to some kind of animalistic gutter, where information is lost amidst memes and junior high insults, we see actual free speech (information) being restricted under the call to control expression because some of the expression is sick and evil.

What you watch and read and click on is what tells people they should make more of. We're all to blame. We don't get to hide behind the passivity of a watcher or consumer of this kind of expression, this kind of content. Our presence is a vote. Our dollar is our vote. Your consumption of media is tightly connected to your expression of ideas. Garbage in, garbage out.

A self-controlled population of people can be free, and absorb a few anomalies at the extremes. But we've become an extreme people where self-control is the anomaly. We are destined to crash and burn in that state.

Our Constitution and nation aren't going down in flames just because of voter fraud and Nancy Pelosi and Joe Biden and Fauci. It's going down in flames because we've reached a critical mass for immoral people with degenerate thinking. It's not just those marching in rainbow parades. It's those with filthy mouths laughing at filthy memes reveling in dank and dark ideas. Whether they share, repeat, or create that kind of content publicly or not, harboring and nurturing it is enough. The Constitution cannot rule an unruly and degenerate people.

And there's plenty on both the right and left.