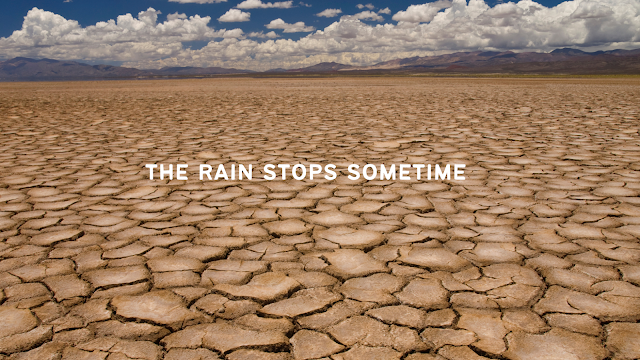 "You don't close off the rain barrel just because the ground is wet," I said to a friend.

My sister has her own business. Business is booming, but finding anyone to help her work it is not. She's got money coming in but is working herself to death.

"I just want to pay down debt and make as much money as I can now," she said. "Who knows what the future brings."

You make money while it's possible, because someday it won't be.

Why aren't people working? Why are so many jobs unfilled?

Some say the unemployment benefits from the pandemic are too good. There's probably truth to that. When September rolls around and all of the benefits are gone (unless they're renewed), will we see a change? Folks banking on there being a job available for them after summer is over are foolish gamblers; business owners will find ways to make it work with fewer workers, or they'll simply close their business. Who's to say there will be a job waiting after your last big unemployment check comes in? Who's to say automation or more efficient methods won't have made you obsolete?

Maybe there are other reasons, too.

I heard a talk show host share data that said during the Great Recession of 2008, American households lost $3 trillion dollars. Somehow during the pandemic, households saw an influx of $13 trillion. When you have a lot of cash or spending power through easy credit, you might not be motivated to go out and work and get more. I know a lot of business owners and service/hospitality workers didn't see that influx of cash, but it was a strange time of false buoyancy due to government checks, halted rents, and incredible unemployment benefits. Working from home meant saving on commute, daycare, and other expenses.

There's the growing problem of a generation of teenagers and younger people who don't work like they used to. Summer jobs meant most of the fast food and service industries had these younger workers, back when I was growing up. I don't know what they do now, but I see a lot of adults working these jobs. It's probably why there's a push for higher minimum wages, since jobs that used to be considered low-wage for young people to earn some extra cash are now being expected to feed a family.

Have you heard about the new trend of a modern version of a gap year? Some kids graduate high school and take a year off before college (which, considering what our colleges are teaching, maybe ought to be skip it all together), and...do nothing. Not travel. Not work. Not save money for college. Just hang out. Maybe play video games? Shame on those parents who let them get away with it. Any parent with an able-bodied teenager who isn't working but is being shuffled around for sports or summer fun has zero right to complain about poor service, poor staffing, reduced hours, and long wait times. Their kid ought to be working. They could get a job right now that would absolutely work with their personal schedule.

There's also the issue of a massive number of people who got a taste of working from home wanting to stay home. It will work for some (I work from home), but it can't work for everyone. And so, perhaps like Cousin Eddie from National Lampoon's Christmas Vacation, they're going to hold out for a management position for years.

I know there are women who are unable to return to the workforce because still-lingering pandemic restrictions, or the fallout of 2020, have made it impossible for them to find day care.

Lots of reasons, maybe, as to why there's a new help wanted sign every day.

"Look at all these jobs for the taking!" I said as we were driving around, counting those signs. "People are leaving money on the table!"

I have considered picking up an extra job, even though right now I'm drowning in freelance writing work having hopelessly overbooked my calendar, and have no idea how to work a job into that writing schedule. But there's money to be earned, just waiting. It pains me to see it.

"I think it's a perfect storm of all of these factors," I said to that friend as our discussion went on about why there were so many jobs available. "All of that came together at the same time and here we are with more jobs sitting open and unfilled than ever before, people flush with money through government checks and ample credit, and a sneaking inflation that is creeping up for the pounce on people who don't pay attention to pricing."

An old fellow came into my sister's place of business, and got to chatting. He was a lifelong hard working man who had finally retired. They got to talking about these things, and he, having lived through many recessions and tough times, said it plainly.

"Why are people so blind?" he said. "Can't they see what's coming? They should be working and saving money."

Can't you see it? Can't you feel it? Do people really think stimulus checks and prosperity and cushy lives are in the future? Do you still believe government talking heads assuring you that everything is fine, you're fine, and endless trillions in spending and freebies and lawlessness will make everything fine?

My sister pointed out that her loathed national bank had sold all of their student loans to someone else, and notified her that they were ending programs such as a open credit line as overdraft protection. They are girding themselves up for what seems like an expected perhaps soon-coming credit default. They aren't saying it overtly, mind you. They're too wrapped up in woke social justice and rainbowizing their social media feeds to placate a bleating public to let their customers know that a financial tsunami is coming.

But we shouldn't need them to tell us.

Housing prices are off the charts. A house near me, average beige on a busy road sporting one of the most crooked non-private privacy fences I've seen, is on the market for nearly half a million dollars.

More and more I see shelves in stores that have an odd item here and there unavailable due to supply chain and production issues. I've read stories of restaurants who can't get their supplies because there aren't truckers to deliver them. Several restaurants in town are partly shut down due to lack of workers and supplies.

I know that we have significantly less ground moisture than we did in dry 2020, and that means crops that made it through last year's drought will fail if this year's drought continues. That means food prices will increase.

I see the articles about inflation. I see the prices gradually rising and the food content in packages at the store having less content for the same dollar amount. I've priced out plywood and 2x4's. I watch the gas prices inch up. I've talked to business owners who say that if things don't change soon, they can no longer absorb the price increases and will have to pass them on to the customer. Summer might end with a mighty bang in your pocketbook and maybe, when your summer fun is over and you're ready to go back to work, there won't be any work left.

I don't care how much money I have. I always want to work. Work when you can, and save, because someday you won't be able to.

Jim Wetzel said…
I've been thinking about this for a few days since reading it, and about the general topic (the economic weirdness) for a good while now. I can't claim to know why people are behaving as they are, but I can offer a few *conjectures* (sounds more dignified than "guesses," I suppose).

It might indeed be that people aren't working because their idleness is being government-subsidized. Very likely, that's the reason for a large fraction of the non-workers. But another possibility might be that people don't want to face workplaces with mask mandates, to say nothing of "vaccine" mandates ... and, in the case of larger corporate employers, trainings (struggle sessions) in woke-osity. Case in point: myself. I retired from my engineering career back in 2013, and then worked several part-time jobs (low-level ones, like working in a small hardware store). As you say, there's no shortage of such gigs at the moment, but I'm sticking with my one-day-a-week volunteer "job," because, as far as I can tell, employers are generally requiring workers to choose between The Jab and The Mask, neither of which is acceptable to me. I may not be the only one taking this position.

And then, there's the spending. You cited the insane real estate market, and that probably is the best example. It also seems to me that even-harder-to-justify spending on goods that perish with the using (food that the buyer does not cook and that is often delivered, and -- top-of-mind at the moment, fireworks) has been happening at rates that I don't remember from my earlier life. Here, too, I have a guess to make. My guess is that many people are uneasily aware of the wild magic money creation (I would say "money-printing," but that's so 20th century; these days it's numbers in a spreadsheet) that's happened in these past two years in particular. They may be expecting an explosive hyperinflation, and they may be correct in so expecting. So the thought may be "spend it today, while it'll still buy at least a little something."

The old order in the US does feel to me as if it's very, very close to its end now. If, a year from now, we can still be having conversations in this way, I wonder what we'll be talking about?
July 10, 2021 at 8:24 AM

Julie said…
The part about the mask, vaccine, and woke mandates is completely valid. I know I'd avoid that as long as I could.

I was just in South Dakota camping for a week and there were help wanted signs everywhere. There's no mask or other requirements, but perhaps in that case, in some situations, it's an issue of the usual summer tourism workers from other countries not being able to make it? I know Medora and similar places rely heavily on that.